Amateur pianists come from a diverse range of backgrounds. We are frequently viewed as benign mavericks, eccentric and obsessive hobbyists who spend many lonely hours detached from family and friends with a shiny wooden box containing hammers and strings. Because it is a solitary activity, we duly seek out the company of others who understand the compulsive nature of our pastime. Always on the look out for opportunities and safe places to perform the music we have learnt, we find places of pianistic sanctuary where we celebrate and reveal our musical triumphs, sharing our mistakes and aspirations in an unfettered and experimental manner, supporting each other with kindness, encouragement, technical solutions, musical ideas and compassion.

It was with these hopes and aspirations we attended Lot Music, a piano course for advanced and committed adult amateur pianists held annually in July over two consecutive weeks in the South of France. We had heard about it for a few years from friends who had previously attended and they felt we would enjoy the experience. It is now in its 21st year, organised by Anne Brain, a retired plastic surgeon, and held at Le Vert, a large hostellerie in the tiny remote village of Mauroux, owned by Bernard and Eva Philippe.  Anne leaves her piano there through the year, a well-maintained Yamaha grand, easy to play with a consistently beautiful clarity of tone and full range of sounds. Some participants also stay at Le Canel, a gîte located a few miles away from Le Vert.  Practice pianos are scattered around both sites, including one rather dangerously positioned in the wine cellar next to some fine French claret! The tutors for this year were Martin Cousin and Leon McCawley. 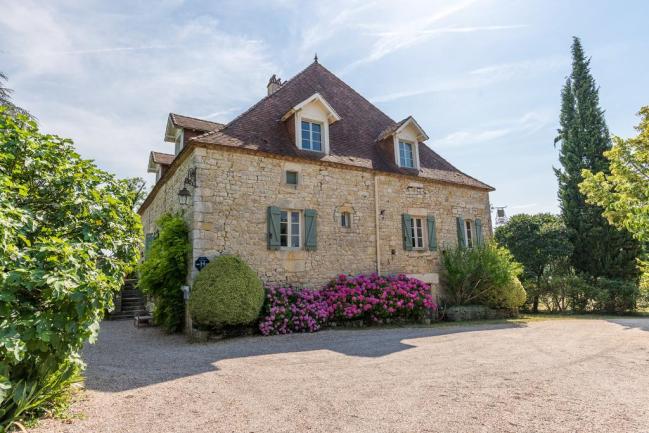 One of the joys of being a pianist is the endless volume and multifarious range of repertoire written for the instrument. There is available literature for all levels of skill, representative of so many countries, spanning over four centuries, illustrating all musical genres and magnitudes of composition. We played music written between the 17th and 21st centuries. We were two happy gangs of none adult participants in week 1, and another 9 in week 2. A few had persuaded their spouses and partners to join us, perhaps lured by the promise of superb food and hospitality, the swimming pool, the beautiful French countryside and the many moments of wonderful piano music.

What can we say about those professional pianists who offer us their time? They are away from their homes and families, prepared to live with and work with a group of diverse adult personalities, musical dilettantes from other professions with all the usual baggage of grown-up life experiences. We remain in awe of their pianistic skill and are grateful for their generosity.

Our tutor on the first week was Martin Cousin. His teaching was insightful, detailed, tenacious and always encouraging. He was a respectful and supportive advocate of our often unrealistic personal ambitions. Fundamentally, he never suggested any of our music should only be played by those with a professional training. There were tear-jerking moments for all us when we made technical and musical changes suggested, facilitating our fingers and opening up worlds of harmonic and orchestral sound previously not considered.

He had taken time to examine the scores we brought before coming to Lot. Much of it he had played during his career, but we were always amused when he told us he didn’t know a particular piece of music well, and then proceeded to sight read it accurately and beautifully! Most importantly, we experienced tremendous joy, fun and laughter through the week, and we shared two piano and duet repertoire in some performances.

Martin played two evening recitals during the week, treating us to Rachmaninoff’s Variations on a Theme of Chopin Opus 22, Chopin’s Sonata Opus 58, Rachmaninoff’s Variations on a Theme of Corelli and Prokofiev’s Sonata No 7, Opus 83. There is no room for inertia when playing this repertoire, and he served the music with complete technical security and artistry throughout. The audience were captivated by his range of sound and the triumphant and exhilarating virtuosity displayed. However, it was in the quieter more contemplative moments of the Chopin sonata and the Corelli Variations that we were witness to real musicianship, suspended in a beautiful and reverent sound world of hope and contentment. It was as good as it gets, and both recitals demanded stamina and poise in the ambient intense heat.

One participant compiled a collection of ‘Martinisms’, amusing us all at the dinner table with quotations from our lessons that were entertaining and insightful. One comment that particularly resonated was the suggestion about how to deal with a repeated passage in a piece of music; “it’s the same picture, but the sun is in a different place”. Wonderful imagery. In music, as in life, we should continually keep looking for where the light is coming from.

During the second week, our tutor was Leon McCawley. Like Martin, he was thoughtful, energetic and kind, and tremendously helpful in his coaching to a disparate bunch of pianists, all with our different ambitions and challenges. He was a fount of advice and guidance on a wide repertoire of works, and we enjoyed his gentle good humour and wit. All of us took away lots of sound advice, such as “get to really know the piano keys, they are your friends”. He very indulgently played some duets and duos after dinner with some of us, including some very impressive sight-reading of the Lutoslawski Paganini variations!

Leon treated us with two recitals, including a deliciously sparkling Haydn sonata (G major, Hob XVI/40), and an enthralling performance of Schubert’s C minor sonata (D958); in the second recital we enjoyed some rarely heard lovely Sketches by Hans Gál, together with Brahms’ Op 119 Klavierstücke, Schumann’s Abegg variations, and Chopin’s Polonaise-Fantasie, Op 61. Every performance was musically inspiring, exciting, beautiful and thought-provoking, and we felt extremely privileged to be such closely involved listeners.

So why do many of us continue to play piano as adults? We could bore you with the robust scientific evidence about how playing the piano maintains cognitive reserve and is a safe and intellectually stimulating hobby to entertain mature adults. But we won’t do that. Music is indeed a source of intellectual and emotional nutrition, a universal language crossing continents and cultures.

We continue to play the piano in adult life because it opens up the heart and re-calibrates the soul, realigning our lives in a way that helps us function with renewed enthusiasm and with the resilience needed to handle the vicissitudes in our professional and personal lives. We meet interesting people and make many real and meaningful friendships when we share music with each other. But mostly we express all that it means to be human when we play.

So many thanks again are due to both tutors, but special thanks are due to Anne Brain, without whom Lot Music simply would not happen. She masterminded and has run this wonderful French musical house party for over two decades, liaising with our hosts Bernard and Eva, who allow us to invade their home and kept us regularly supplied with excellent French food, aperitifs and fine wines. We shall be returning.

Piano courses in the UK and Europe

Dr Marie McKavanagh grew up in a musical family where playing an instrument, singing and dancing were viewed as essential social skills rather than accomplishments. These were troubled times in Northern Ireland and the Performing Arts was one of the few areas of 1970s life to freely cross the political divide. At 17 she won a scholarship to Queens University, Belfast where she read Medicine. She continued her piano lessons with Nancy Patton-Scott at the Belfast School of Music during her undergraduate years, and has continued to have lessons and play the piano as a compelling and uplifting hobby throughout her adult life. She holds an LTCL in Piano Performance. She moved to Cheshire in the late 1980s and worked as an NHS GP in Nantwich for 28 years. She completed her MSc in Performing Arts Medicine at UCL in 2018 with Distinction and won the BAPAM award and the Dean’s nomination for her research into the cognitive functions of adult amateur pianists. She now works as a BAPAM practitioner at Philharmonic Hall in Liverpool, a freelance locum GP and an NHS England GP Appraiser. She is married to Dr Richard Leigh who works in Bolton A/E and flies biplanes when she is practising. They have two grown up children who remain the centre of their universe.

Julian Davis has played piano since childhood and passed the LRAM Piano Performer’s examination in the 1980s. He worked until recently as Professor of Medicine at Manchester University and Manchester Royal Infirmary, while remaining active as an amateur musician. He has regularly given recitals as a soloist, in 2-piano duos, and in chamber music ensembles, and has enjoyed recent recitals with violinist Simon Evans, cellist Eva Schultze-Berndt, and his sister, soprano Nicola Stock. He has taken part in masterclasses and workshops at Dartington Summer School in recent years with Christian Blackshaw, Steven Osborne, and Florian Mitrea. He currently has piano lessons with William Howard (pianist and founder of the Schubert Ensemble) in London.

“You need intellectual and spiritual nourishment to be a performer” – Mark Padmore, tenor #interview #musician #tenor #insights #influences #performing #recording #classicalmusic https://crosseyedpianist.com/2021/07/15/mark-padmore-tenor/
“we are just going to have to find new ways to connect with audiences here” – Adrian Brendel, cellist #musician #interview #insights #inspiration #classicalmusic https://crosseyedpianist.com/2021/07/12/adrian-brendel-cellist/
“I think we need to stop apologising for classical music, stop trying to dumb it down. We need to celebrate it in the same way that we celebrate a wonderful sporting achievement for example.”
“Be humble about your ambition, whilst keeping your vision and goals clear” – Imogen Cooper DBE, pianist
“Chopin – and more specifically his Nocturnes – is the reason why I decided to become a classical pianist professionally.”
Insights and inspiration from the latest interviewees on my #MeetTheArtist site @amydickson @lukestylesmusic