One concert leads to another, or so it would appear based on recent events in my musical life….. Less than a month ago, at a super lunchtime concert given by the sparkling young British pianist Christina McMaster, we were chatting after her performance and she asked me if I was free in early December to play in a private house concert down in Sussex at the lovely country home of Neil Franks, Chairman of Petworth Festival. And so a couple of weeks and two rehearsals at Steinway Hall later, I found myself playing the Wilberg Carmen Fantasy with three other pianists, including Christina and Neil. To say it was great fun would be an understatement – it was possibly the most fun I have ever had at a piano: making lots of wonderful noise (music!) with like-minded people with a true passion for the piano to a very appreciative audience. Add in welcoming, generous hosts, plenty of Prosecco and wine, good food and good company, and one has the makings for a perfect evening.

The programme was eclectic (see pictures below) but it worked and I think the audience really appreciated the range and variety of music played, from Rachmaninov’s striking and vibrant Symphonic Dances (brilliantly performed by Neil and Julian) to miniatures by Satie and Etudes by Debussy (beautifully played by Christina), interspersed with works by Peteris Vasks, Chick Corea, Britten, William Grant Stiff and Prokofiev. A programme need not have a theme nor a common thread when performed by a mix of people who simply want to share their favourite music – and their love of playing that music – with others. And that sense of a shared experience, between musicians and audience, was very palpable, judging by the lovely comments from audience members during the interval and after the concert. 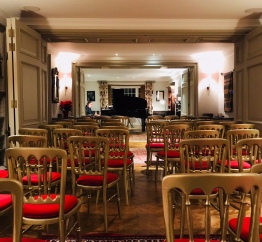 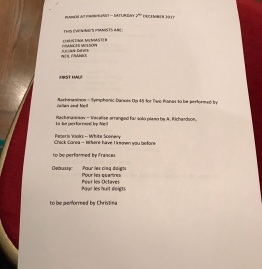 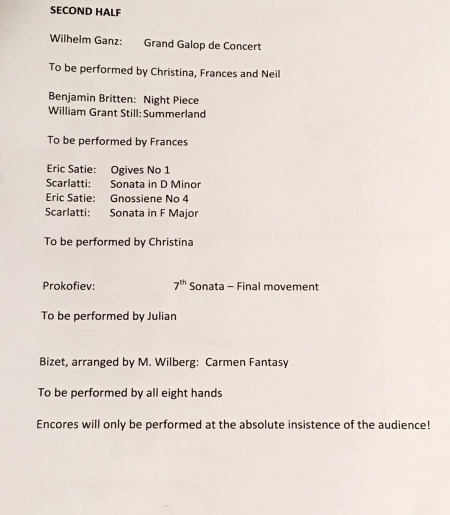 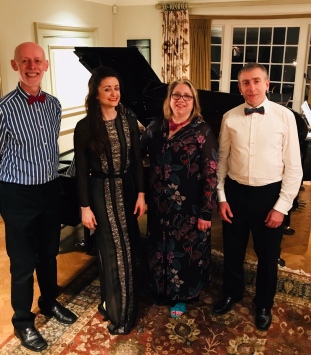 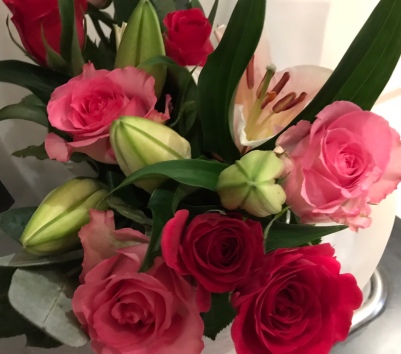 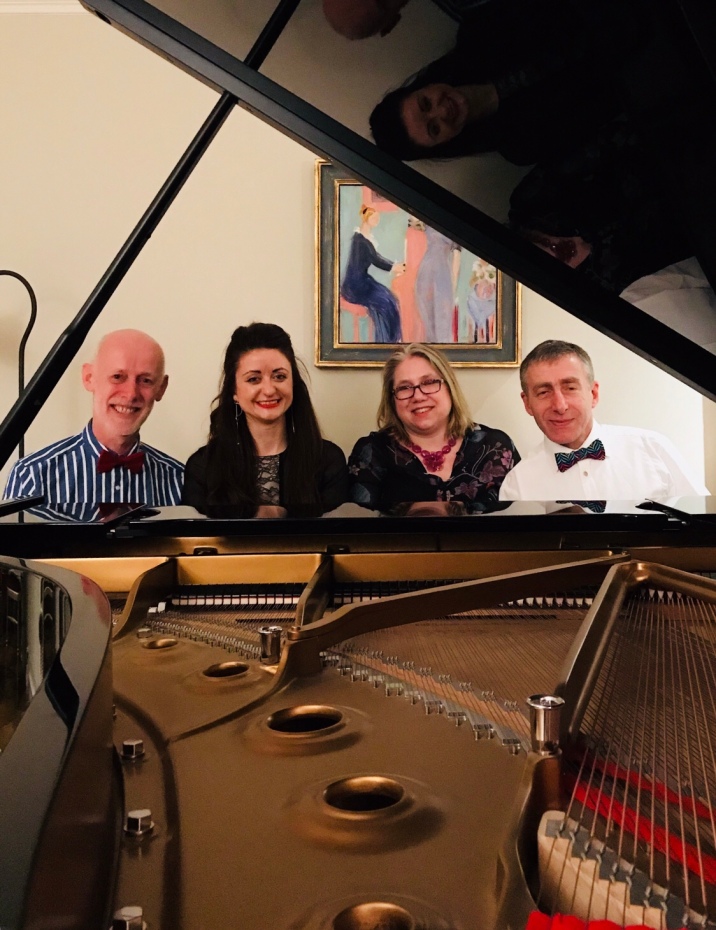 We are so used to hearing music in formal or very large concert venues, like the Wigmore or Royal Festival Hall, that it’s easy to forget that until about 1850, the majority of music was written for and performed in private salons and the home (and music for piano four- or six-hands was composed to satisfy a growing market in the 19th century for piano music to be played in the intimacy of one’s home). Neil Franks’ Pianos at Parkhurst (House) recreates the atmosphere of the rather less formal nineteenth-century salon or haus konzert – an atmosphere that allows for greater connection between audience and performers – and is a delightful and very positive reminder that, fundamentally, music is for sharing.

It was a privilege and a pleasure to be part of such a wonderful and hugely enjoyable evening of shared music making – for friends, with friends and amongst friends.

Petworth Festival celebrates its 40th anniversary in 2018. A preview of the 2018 Festival will be on this blog.

For further information about the Festival, please visit www.petworthfestival.org.uk

Tree #Littlebredy #Dorset #SundayWalk #nature
@jameslisney.schubertreise continues his #Endgame series of concerts focussing on the late works of #Haydn #Beethoven #Schubert & #Chopin at @stgeorgesbris on 6 October in a concert featuring Schubert’s expansive and good-natured sonata in G D894 and Beethoven’s monumental #Diabelli Variations https://www.stgeorgesbristol.co.uk/whats-on/james-lisney-endgame-v/ #livemusic #concerts #piano #Bristol #LateStyle (composer images by @hadikarimi.portraits)
“The experience of a live concert is what has always inspired me most; the atmosphere and vibrations of a hall or special place, the expectations, the excitement, the communication, the feeling of tension and releasing tension. What I love about a live concert experience is the feeling that you are creating a unique moment in time, in history even, in which everything is special. In the best cases (although it happens rarely) both audience and musicians feel like everything falls into place, it can almost be a spiritual experience.”
“2021 has been a stellar year for our fledgling operation – we have published our first monograph on the Umayyad Mosque of Damascus and three more books will be out before the end of the year.”
Worth Matravers to St Aldhelm’s chapel #SWCoastPath #jurassiccoast #SundayWalk #Purbeck #Dorset
Sculptures by @lottescottartist in The Old Engine Shed, Portland. Part of @bsidefestival #art #sculpture #industrialarchitecture