My second trip to Wimbledon International Music Festival proved as rewarding and enjoyable as the first. As part of the Festival’s New Generation Artist Series, pianist Christina McMaster gave a lunchtime concert featuring music by living American composers Meredith Monk and Philip Glass, together with Études by Claude Debussy.

Christina studied with Joanna Macgregor at the Royal Academy of Music and I think the influence of her mentor shows in her imaginative and eclectic programmes and the clarity, panache and vivid colour of her playing. Monk’s ‘Ellis Island’ was written to accompany a short silent film of the same name, which celebrates the gateway to the USA for thousands of immigrants in search of a better future. The music, originally scored for two pianos (I assume the transcription for solo piano was arranged by Christina herself), has a lilting Gaelic flavour, a reminder that many people from Scotland and Ireland emigrated to America. The overall message of the music is hopeful and joyful, though a quieter section at the end suggests eagerness tinged with anxiety at what the future may hold. Christina created a lovely bright, crystalline sound with a great sense of energy throughout, though the music never felt relentless, but rather light and dancing. 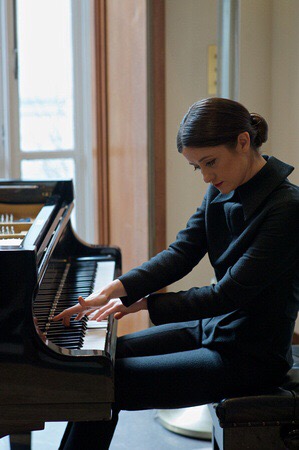 Fellow New Yorker Philip Glass is regarded as the master of minimalism, but his piano music when played with sensitivity can feel almost romantic, and this was certainly Christina’s approach to the two Études by Glass in this programme, one frenetic and urgent, the other more reflective with its Schubertian long-spun motifs, spaciousness and unexpected harmonic shifts. Her sense of pacing, elegantly nuanced dynamics and tempo made these works the highlight of this excellent programme for me.

Debussy’s Études follow Chopin’s model – short pieces written to exercise and improve the pianist’s technique, and like Chopin’s Opp 10 and 25 Études, Debussy elevates the pieces from student exercises to exquisite concert miniatures. The first Étude of Book 1 is dedicated to “Monsieur Czerny” and is an amusing take on Carl Czerny’s rather tedious five-finger exercises which many young piano students have had to endure (I know I did!). Cheeky interjections from rogue fingers hint at the student’s frustration at having to remain in a five-finger position on the keyboard and the work grows more expansive and virtuosic towards the end. It was despatched with playfulness and wit. The other Études were played with similar character, their individual quirks and delights carefully delineated by Christina. There were so many moments to savour – great delicacy of touch, subtle shadings, natural rubato and rhythmic vitality, and the entire performance was vibrantly coloured and very stylishly presented. The encore, Debussy’s ‘Girl With the Flaxen Hair’, was played with equal poise and elegance.
(Photo: Dominic Farlam)