Recently I had the opportunity to play a rather special Steinway grand piano as part of the fascinating ‘Oceania’ exhibition at London’s Royal Academy of Arts.

He Korero Purakau mo Te Awanui o Te Motu: story of a New Zealand river was created by New Zealand sculptor Michael Parekowhai (b.1968) as part of a larger artwork for the 2011 Venice Biennale exhibition. The title of the sculpture refers to a 1920s New Zealand novel which in turn was the inspiration for Jane Campion’s film ‘The Piano’ (1993). The artist is insistent that the piano should be played and wherever the instrument is on display – whether in London, its home at the Museum of New Zealand Te Papa Tongarewa in Wellington, or on tour in other exhibitions – the piano is kept in tune so that members of the public may play it. For the artist, the art work comes to life when played and performance is crucial to it:

There is no object I could make … that could fill a room like sound can…….. the actual piano just kind of melted away.

I knew it was an old instrument when I sat down to play it; its keys are ivory with a creamy patina of age, and it has a light action, suggesting a lot of use in its former life. After I’d played it, I decided to do some digging to find out more about the instrument and discovered its rather unusual provenance.

The original instrument was a 1920s Steinway Model D, sold in London and shipped to New Zealand half a century later. Inside the body of the piano was a pencilled dedication: “Dear friends, may this beautiful instrument bring you happiness and inspiration. All my love, Lili Kraus, London, Christmas 1959.” Lili Kraus was a Hungarian concert pianist, noted in particular for her interpretations of Mozart and Beethoven, Chopin and Bartok. After time spent in a Japanese prisoner of war camp during the Second World War, she moved to New Zealand, where she became a British citizen and spent many contented years performing and teaching. She finally settled in the US, where she died in 1986. For me the encounter with the piano felt curiously serendipitous, for only last week I had been reading about Lili Kraus’s premiere of Schubert’s ‘Grazer’ Fantasy (about which more in a later article), and listening to her recordings of this little-known work….

The sculptor Michael Parekowhai regards pianos as a statement of high Western art and has used them in other artworks (for example, ‘The Horn of Africa. A seal balancing a piano on its nose’). He acquired this Steinway in 2002 and asked Auckland-based piano restorer David Jenkin to see if he could do anything with it. There is a tradition of “art case” pianos, with painted or other decoration, inlays and marquetry, or the use of particularly striking wood such as walnut or bird’s eye maple. Michael Parekowhai’s carved piano certainly references this tradition, but takes it to an extreme, such is the richness of the carving and its symbolic narrative. Unlike other art case pianos, the lid is pierced by the carving and thus the sound emerging from the instrument is diffused. The piano was restored, including a new soundboard, to ensure it was playable and a new oak and mahogany rim was created to take the carving. It is Parekowhai’s sixth piano sculpture and took more than 10 years to make. At the 2011 Venice Biennale it was exhibited as part of a larger display exploring New Zealand’s cultural history entitled On First Looking into Chapman’s Homer. The installation included two other grand pianos but these were not in playable condition, merely used as sculptures. The title of the work is taken from a poem by John Keats and by utilising ‘Toi whakairo’, traditional Māori carving on an item deeply emblematic of European culture and craftsmanship, it references ideas of discovery and exploration, the supposedly “civilising” mission of Europeans to New Zealand and its surrounds, cultural exchanges between the old and new worlds, and New Zealand’s post-colonial situation.

In his sumptuously carved grand piano – an instrument originally built in Germany – Parekowhai shifts the cultural focus: the carvings fully take ownership of the piano, literally and metaphorically, transforming a European instrument, which held pride of place in the nineteenth century drawing rooms of New Zealand and Europe alike, into a work of ornate Maori symbolism and colourful story-telling, while also making a thought-provoking and witty commentary on notions of European colonialism and cultural appropriation.

When I played the Maori piano, I had just come from a weekend of house concerts given very much in the tradition of the nineteenth-century European salon, with an attentive audience formally seated in the music room of an English country house. I had never played a piano in a busy gallery space before, where people were wandering around looking at the exhibition. My performance felt secondary to the exploration of the artworks on display, and I wanted my mini programme of pieces by Pärt, Sibelius, Schumann, Bach and Corea to feel like a background to the exhibition, rather than expecting people to stand still and listen. In fact, the experience was very mixed: despite a lot of noise of people walking through the exhibition, there were moments when a sense of attentive listening was palpable. At other times people walked around the piano to examine the carving in more detail and take photos. Some stood behind me, looking at the music, or peered into the belly of the instrument to see the hammers in action or to marvel at the wonderful light effects and shadows created by the pierced carving. The sound of the piano being played drew people into the space in which it was exhibited, and the gallery setting allowed people who may not necessarily go to classical concerts to experience music in an informal yet meaningful way. I felt very secondary to the instrument, yet also part of a bigger, collective artistic and musical experience. The piano was on show, not the music, and certainly not me, and I like to think this is the effect the artist wants to achieve with his work. 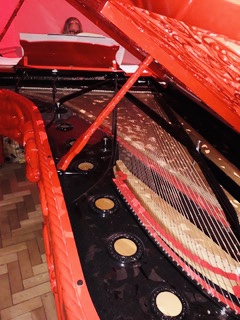 Oceania continues at the Royal Academy of Arts until 10 December.

Read a review of the exhibition

Biting satirical lithographs and empathetic depictions of people going about their everyday lives are displayed alongside sculptures and paintings in the Royal Academy’s new autumn exhibition of work by French artist Honoré Daumier, the first exhibition of Daumier’s work in the UK for fifty years.

When Manet’s picture The Railway (1873) was first exhibited at the Paris Salon of 1874, critics were hostile. The painting depicts a young woman seated in front of iron railings overlooking the sidings at the Gare Saint-Lazare in Paris. She raises her head from the book she’s been reading to look up at the viewer with an expression of mild indifference, while a little girl next to her turns her back on us to observe the clouds of steam rising from a passing train. Critics were confused: was this a subject picture or a double portrait?

The Royal Academy’s spring blockbuster exhibition for 2013 focuses on the portraits of Edouard Manet. It explores the artist’s modern approach by suggesting that his narrative genre scenes are in fact portraits, which place his sitters in natural, realistic situations, turning his subjects into “actors” in scenes of modern life, and authenticating his scenes of contemporary life by filling them with real people. Read my full review here