Few of us believed the 2020 lockdown would go on for more than a couple of weeks. In the midst of the initial announcement by government, many musicians – and others – watched in horror as their work dried up overnight. When it became apparent that this was no “two weeks to flatten the curve”, musicians had no work in prospect with concert halls and venues closed for the foreseeable future. Bereft of live performances, many turned to the internet as a means of sharing their music with others and a number of very imaginative projects grew out of the weeks of isolation.

#UriPosteJukeBox, created by violinist Elena Urioste and pianist Tom Poster (the handle is a portmanteau of their surnames, and they are a husband-and-wife duo), was originally intended “to simply to keep our minds sharp, fingers busy, and friends smiling” (Elena Urioste) by sharing a daily music video for each day spent in isolation. The inclusion of the word “jukebox” in the hashtag gave the project “an old-timey method of enjoying music” and the musicians invited their virtual audience to suggest what they might play, thereby adding another “jukebox” element to their performances. Flooded with requests, the project that took off in ways the duo had never dreamed of, capturing the imaginations and hearts of listeners around the world, and embracing requests that traversed many musical genres – from Bach to Britney Spears, Mozart to Messiaen, Sondheim to nursery rhymes and even mash-ups of pop songs of the 1980s! The pair entertained their virtual audiences and followers with daily videos, featuring increasingly elaborate costumes, props, additional instruments, and multi-tracking. In all, they made 88 videos – one for each key on the piano. The impact of the endeavour and the joy it brought to so many during an extraordinarily challenging time was formally recognised with a Royal Philharmonic Society Inspiration Award

The project also led to new commissions – An Essay of Love by Mark Simpson (conceived for the pair even before they approached him), Bloom by Cheryl Frances-Hoad, Emotiva by Clarice Assad, Arietta by Huw Watkins, Bha là eile ann (There was a different day) by Donald Grant, and Peace by Jessie Montgomery-,  pieces written in response to or reflections on lockdown and the strange, uncertain days of 2020. These pieces were premiered in the daily music videos and have now found their way onto The Jukebox Album, a collection of 16 of the duo’s favourite pieces from the project.

In keeping with the eclecticism and imagination of the original project, the album presents a wide range of music – from much-loved favourites like A Nightingale Sang in Berkeley Square, Send In The Clowns and La Vie En Rose (all given a wonderfully “vintage” sound through Urioste’s silky violin tone and Poster’s warm piano sound) to works by Lili Boulanger, Cecile Chaminade and Gabriel Fauré.

The opening track, Jerome Kern’s Look for the Silver Lining, reflects the spirit of the whole Jukebox project: bereft of concert work, Poster and Urioste sought a silver lining in their own situation, and embarked on something primarily to keep themselves occupied and to give them focus (“I probably would’ve put the violin in its case and not seen it for a month or two” – Elena Urioste), but which quickly became something joyful and uplifting to lighten the darkest days of lockdown, providing comfort and pleasure to the many people who craved music and connection.

The resulting Jukebox Album is a ‘recital disc’ of great variety and charm, all performed with commitment, care and obvious affection. Perhaps it is just the effect of listening after 18 months of lockdowns, restrictions, heightened anxiety, loss….but many of the pieces are tinged with poignancy – Bha là eile ann (There was a different day) by Donald Grant is a real tear-jerker track, but this is quickly dispelled by the jollity of the finale, Jukebox Toodle-oo, which features Tom Poster on piano, cello, descant recorder, kazoo, and swanee whistle, and has a delightful 1930s foot-tapping swing.

The Jukebox Album is available on the Orchid Classics label

Tom and Elena chat about The Jukebox Album:

Tom: Which was your favourite track to record on The Jukebox Album?

Elena: I think I’d have to say the opening track, Jerome Kern’s Look for the Silver Lining. Not only did I get to multi-track four violin parts using the shimmeriest old-school sound I could produce, but the whole track had an authentic sense of #UriPosteJukeBox spontaneity, as Tom decided to arrange it the night before the recording sessions!

Elena: And which was your favourite track?

Tom: Almost certainly the closing track, the Jukebox Toodle-oo. Prior to this whole project, I really never expected to find myself laying down tracks on recorder, cello, swanee whistle and kazoo at the Menuhin Hall for Orchid Classics…

Tom: What was the funniest moment in the Jukebox Album recording sessions?

Elena: Sitting with our engineer, Patrick Allen, both of us crying with laughter as Tom recorded his kazoo tracks. I wish the adrenaline-fuelled (and wildly inaccurate) first take had been preserved on the final recording…

Elena: What was your favourite costume in the original #UriPosteJukeBox video series?

Tom: Probably the (accidental) Tin Teletubby of Oz. Or perhaps Olaf the Snowman, except for the carrot nose which kept poking me in the eyes, and the fact that Elena made me crouch down behind a piano as she attempted multiple takes of her opening monologue.

Tom: What’s one piece/song that was never requested which you’d have loved to include?

Elena: Boyz II Men’s On Bended Knee, though I’m afraid I don’t think I could do Wanya’s vocal pyrotechnics justice on the violin.

Tom: My longtime piano teacher, Joan Havill. Having spent many years poring over the finer details of late Beethoven sonatas with her, I felt particularly nervous about the idea that she might see me playing Beyoncé on the recorder in the bath. In fact, I know she did see some of the videos (“well it’s lovely for people to see a lighter side of you, darling“) though I’ve no idea if she saw that one…

Elena: As many of our die-hard viewers know, Joey Urioste (Elena’s parents’ dog) starred in a few Jukebox videos. If you could invite any other animal to guest star, what/who would it be?

Tom: Would you rather (a) walk out on stage to play the Mozart Bassoon Concerto at the Proms, having never played the bassoon, or (b) play every recital for the rest of your career with a pair of trousers hanging off your head, without ever being able to explain the reason?

Elena: The latter – in fact I think I’m going to do it regardless. 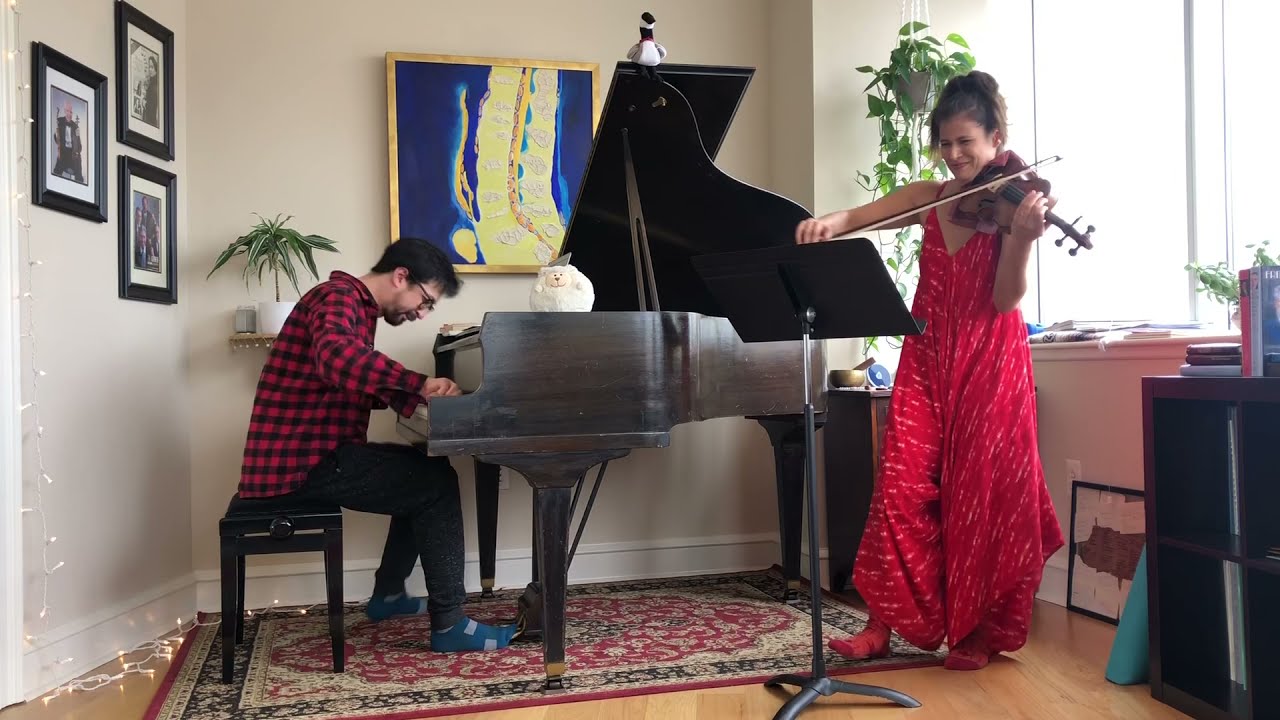