Acclaimed impressionist, comic and actor Alistair McGowan shares his passion for the piano and reveals how he prepared for his debut recording. 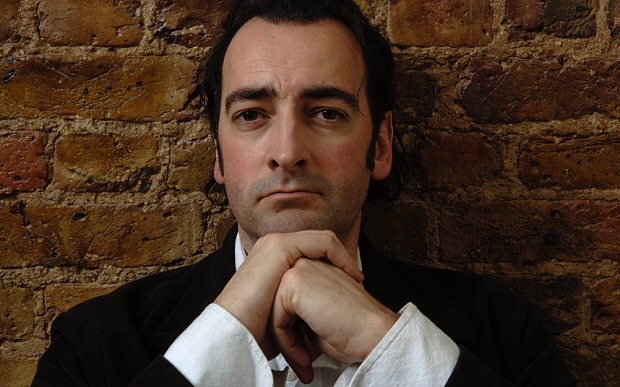 What are you first memories of the piano?

My mother had and still has a very good Chappell upright – ‘from Corporation St in Birmingham’. She was always playing the piano when I was young. She was the accompanist at the Evesham Amateur Operatic and Dramatic Society for years and was always playing and practising the score for the latest Rodgers and Hammerstein or Gilbert and Sullivan show they did. She also played a few classical pieces which I would often ask her to play to send me to sleep. She was a fabulous sight-reader and could play almost anything. It breaks my heart that she no longer plays.

My older sister, Kay, learnt to Grade Eight and so was constantly practising. My father and I would listen to her pieces again and again and again as we tried to watch ‘Star Soccer’ in the room next door. It’s the only way to practise but it gave me a very good idea of how hard it is to live with or next door to a pianist. She didn’t touch the piano after her final exam. She is making noises about playing again after all the interest I have shown and I really hope she does go back to it. She was very good!

Did you have piano lessons as a child?

I did two years and passed two grades but stopped when I was 9. I regretted it for the rest of my life and finally took up the piano again for a couple of years in my 30s and then TV stardom got in the way. So, I have only really, finally, finally thrown myself at it again over the last 2-3 years and particularly since being involved in my debut recording project.

What kind of repertoire do you enjoy playing, and listening to?

Nothing too ‘bangy’ and anything marked ‘lento’! Over the years, I’ve also loved piano music that I can work to and I think the album reflects that. The music is reflective and romantic, spanning everything from Bach and Field via Satie to Philip Glass. I hope it’s good to revise to, to work to, eat to and even to fall asleep to, too.

How do you make the time to practise?

At first, it was a struggle fitting things in around other work and I had to cut a lot of things out of my life, but I began to love playing and improving so much that I soon didn’t miss reading about and watching endless football or even playing tennis. I watched less television in general with no regret and played less snooker too. I changed a few habits but have simply acquired new ones and made a lot of new friends through it too. Through it all, I kept on swimming as a wonderful release for mind and body!

Do you enjoy practising?

I have to force myself to do scales and arpeggios and Hanon but otherwise, yes. I had some very good advice from lots of people. Fellow comic, Rainer Hersch, suggested putting a stop-watch by the music and making sure that every fifteen minutes you change your practise to a different piece or a different exercise to keep the brain active and receptive. I tried to do that. James Lisney [concert pianist and teacher at piano summer schools] is very keen on pianists getting up and stretching regularly, which is also very important (though not a good idea in a concert!). I am a little troubled with a sore right thigh and foot from all the pedalling though.

Have you participated in any masterclasses or piano courses?

The person who got me playing again, the fabulous accompanist Lucy Colquhoun, suggested that I attend a weekend course with Paul Roberts in Sussex. I learnt a huge amount there in three days and realised above all how much I had to learn and that the learning is never done. Paul was just inspirational and in 2015 I went on his week-long piano course in France and then attended two courses in subsequent years at the delightful La Balie (in south-west France).

I also returned to Paul in 2016 for another woodsmoke-filled weekend. As well as learning from such inspirational players and teachers (James and Paul), who both have such a huge knowledge of piano history, it was great to meet other amateur pianists who shared my passion – most of whom were way ahead of where I was – all willing to play and share and talk about this fantastic repertoire that has been left to us by these amazing composers. I also performed in a number of practise concerts in Barnes with my teacher, Anthony Hewitt, and watching Anthony play live was a masterclass in itself.

What have you gained/learnt from this experience?

Well, obviously, how much I enjoy playing the piano, but also the importance of goals and patience. I’ve gained even more respect for professional pianists and feel I’ve enriched my life and my soul. I have been a little surprised by how much I have enjoyed regularly turning my back on the modern world.

As an adult amateur pianist, what are the special challenges of preparing for a performance?

Believing that the sound you are about to make is worth listening to. Believing that you know the music and not letting the occasion distract you from listening to the sound you are making with every note. I had moments of being very focused (reading ‘The Inner Game of Tennis’ was a big help), but often heard myself saying ‘What on earth do you think you’re doing?” If you can keep that voice out of your head, you will generally be fine!

How did you prepare the pieces featured on your new disc?

I worked very hard, bringing each of them to the boil in turn. I did a lot of note-bashing on the electric piano at home but there is no substitute for a real piano for the touch. I was lucky enough to have some sessions in St Mary’s Church in Barnes on their excellent Steinway, which got me used to the touch and sound of the best big pianos. I also went to listen to a good few pianists in concert and learnt a lot from hearing James Lisney, Lucy Parham, Viv McLean and, of course, Anthony Hewitt.

I also listened to and registered recordings of the pieces I was playing – to get to know them intimately – on trains and even, especially, peacefully, in bed.

And how did you find the experience of recording the music?

It was like a lesson, an exam, a recital and the greatest pleasure all at the same time – immensely draining and yet utterly thrilling to hear the music I had learnt and loved coming out of the best pianos in the world !

It was also terrifying knowing that this was the one chance to get each piece recorded. I read a wonderful book called ‘Piano Notes’ by Charles Rosen which has a very helpful chapter on the challenge of recording and refers especially to the need to not to worry about mistakes. They can be covered. My teacher/mentor, Anthony Hewitt, was wonderfully helpful at and about the recordings. My producer, Chris Hazel, was unbelievably supportive, helpful and strict!

I had to pinch myself after each recording. I couldn’t believe what I was being allowed to do. I had been to drama school at The Guildhall and worked at The Barbican Centre tearing tickets as a student. So, to be recording in St Giles Cripplegate, just opposite these two important buildings in my life, felt like some sort of karma. And after the eight-hour sessions, I felt like some sort of korma!

What was your motivation for making the disc?

It was principally the challenge of seeing if I could get to a level somewhere near good enough that people would want to listen to the music I was playing. We all need an incentive and knowing that my playing was potentially going to heard by thousands was a real carrot.

I also hope that the album encourages people to play by showing them the beauty of some well-known and some much lesser-known pieces. I have often felt that virtuoso playing (impressive as it is) can just as easily put people off playing as it can inspire them. I know I heard myself say for many years, “Well, I could never play Rachmaninov’s Third Piano Concerto like that so, what’s the point…?” I really, above all, hope that people who hear the album will say, “I think I could play that” and do so

What advice would you give to other adults who are considering taking up the piano or resuming piano lessons?

Do it! It has brought me so much pleasure. There are moments of frustration, of course, but, with patience and a lot of hard work, it is just wonderful to be able to play pieces that you’ve loved listening to all your life. I think learning how to learn is as important as learning how to play ; it’s important to get the most from your playing time. Setting goals is also important. Perhaps organise small recitals at home, before friends, in order to give yourself a deadline.

If you could play one piece, what would it be?

Ah! That changes all the time as I hear more and more piano music that I want to play and as I am improving. Currently, I am in love with Madeleine Dring’s ‘Blue Air’ but find even the opening few bars very challenging. It’s a wonderful evocation of ‘cool’ and sounds like a theme from any 1960s Michael Caine film. It’s unlike anything else I play. I also have an eye on Debussy’s ‘Ballade’ – but that’s a good few years away, I fear !

Why go on a piano course?