In our commercially-driven modern times “success” tends to be measured in monetary terms, and those people who have achieved the dizzy heights of a very large salary and financial security long into the future are generally regarded as “successful”.

In fact, most truly successful people don’t measure their achievement in financial terms – some regard personal happiness or satisfaction and self-fulfillment as the definition of success, others the opportunity to live the life they truly want and deserve, and not just the life they settle for. For most of us, success is highly personal.

For musicians the definition of success is very broad, reflecting the diversity of musicians’ career paths, and the musicians I talked to in writing this article cited far more indeterminate definitions of success, beyond strictly tangible rewards. Many mention the experience of performing, of touching or moving the audience through the power of music, or the satisfaction of knowing, in concert, that one has done a good job.  Very few of the musicians I spoke to mentioned monetary rewards. Given the precariousness of the musician’s career, not to mention the self-doubt that regularly looms, the thoughts of “am I good enough?”, I think an important key to a sense of personal success is not allowing others’ metrics to define your own success: maybe you don’t secure big concert fees, but if you are asked back to play with an orchestra you really admire, this can be a very positive measure of success.

The following quotes are from professional musicians (soloists, chamber musicians and orchestral players) and music teachers.

Looking into the audience and seeing someone clearly blissing out. Or crying. Preferably crying

Touching people. Making them pause from the hectic cacophony of life to take a breath

To be given a genuinely humane, fair hearing, removed from others’ varying needs to either ignore, gratuitously denigrate or, just as bad, over-praise…

Knowing I’ve done my very best. Creating something unique to me (and hopefully to others’ experience, too). Knowing that performers get a lot out of performing my work, despite (or perhaps because of) the challenges. Knowing some people get it, or at least get off on it in some way. Waking up in the morning really excited about the piece I’m currently composing. Having the respect, admiration and support of my peers and ultimately managing to pay the bills through doing something I love and am passionate about!

Feeling, in a concert, that the audience is actively listening to what you are playing.

Having projects I’m excited to work on with musicians I like working with. Making music that is meaningful to some people. Feeling like part of a music community. Earning a living through making music.

When you feel happy and fulfilled – and secure.

To reach the moment of magic on stage regularly

When the aims and aspirations of preparation and practise are fulfilled in performance.

Not sure a performance should ever be considered a ‘success’. Doing so means you are content with what you’ve delivered. Different levels of failure perhaps? “Ever tried. Ever failed. No matter. Try Again. Fail again. Fail better.” (Samuel Beckett).

As a player, the occasional experience of performing as if ‘out of one’s body’. As a composer, an audience being moved by the performance of a piece I wrote.

I have to say, the only real mark of success is being able to make music at all: to sing melody, or to write one down…to play one on an instrument or to compose, as I do, for multiple instruments…Success is really only being only to make sounds in time that are animated by true feeling. Beyond that, there are all kinds of formal elements to address….but success is just making the original musical response.

Being able to determine one’s own projects and having enough to get by in the meantime to do so — as opposed to having to take whatever comes by just because we need the money. Otherwise, for me, playing wherever whenever — doesn’t have to be Carnegie Hall so long as there are people to listen!

And some quotes from Meet the Artist interviews……

The ability to express one’s inner soul and communicate on a completely different level through the power of music is unparalleled in any other form of human communication and having the ability and determination to achieve this is immensely rewarding. – Paul Griffiths, organist

To be in line with what you do artistically. (Whether this works out commercially speaking is another question) – Francesco Tristiano, pianist

Of course we all need endurance and dedication to succeed. But sometimes, success can be measured on a more everyday level – like dealing with a less than perfect piano, or resisting the urge to run away just before the start of the concert! – Reiko Fujisawa, pianist

How do musicians know when we’ve made it? 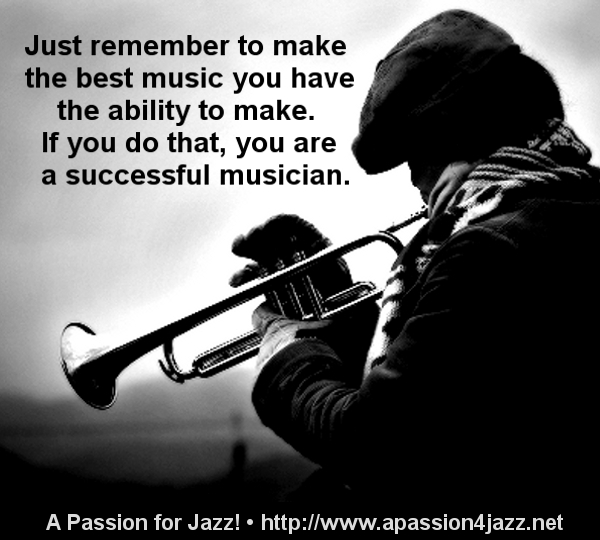