I never really intended to become a pianist and piano teacher – nor a blogger on classical music and pianism, and a concert reviewer. Sure, I was mad keen on the piano as a child and teenager, completing all my grade exams and enjoying consistent rather than startling success in them. I harboured some desire to go to music college rather than university, but an offhand comment by my music teacher at school, suggesting I was not “good enough” to audition for conservatoire (a comment which still has the power to sting, some 35 years on), set me on a different course at 18: I studied Anglo-Saxon at university and had a career in art and academic publishing for 10 years post-university, until I stopped full-time work to have my son.

But the piano had always been there, in the background, a rather frustrating itch which could not be scratched because my father sold my piano when I left home and I had no instrument on which to practise. I occasionally played a friend’s grand piano but lack of practise led to frustration, and it was not until my mother bought me a half-decent digital piano that my passion for the instrument was rekindled. It was gratifying to discover that music I’d learnt in my teens was still “in the fingers”, if rather rusty, and I began to enjoy the routine of practising once again. Around the same time, I started going to concerts regularly again, something I had enjoyed as a child with my parents, and into my teens, reacquainting myself with repertoire I knew and loved and making new discoveries. A chance conversation with a friend in the school playground while waiting to collect our children led me into piano teaching – that was 10 years ago…..

Alongside this, I felt it was important to improve my own playing, and in 2008 I returned to regular lessons with a concert pianist and professor of piano at one of London’s leading conservatoires. It was daunting initially: I had not been taught for nearly a quarter of a century, and lots of bad habits from my teens and lack of technique were quickly exposed, but the teacher was sympathetic and supportive, and it was satisfying to see my playing improve rapidly under her guidance. Because I had not had a formal musical training at 18, I always (and still do) felt I was trying to catch up with those who’d had that education, and this was a major motivation for taking an external performance diploma, in addition to the desire to continually improve my playing by setting myself the personal challenge of preparing for the diploma. And so in December 2011, some 28 years after I last stepped into a piano exam room, I took my Associate diploma in piano performance. The Licentiate diploma followed in 2013. Both experiences were entirely positive (in complete contrast to some rather uncomfortable exam experiences as a child): I enjoyed the challenge of learning and finessing the repertoire, researching and writing programme notes, and learning how to be a performer (for one is assessed not just on one’s playing but also on stagecraft and presentation, just as in a formal professional concert), and above all, I enjoyed studying with a teacher again and the self-imposed routine of regular practising. Since 2013, I perform quite regularly, in solo concerts and in joint recitals with friends and colleagues. Learning to manage and understand performance anxiety has been a big part of my development as a pianist, and an aspect I know many others struggle with, which is why I organise workshops for adult amateur pianists on coping with anxiety and developing good stage craft.

I think the rather “accidental” path into my current role, in addition to the long period of absence from the piano, has given me the freedom and confidence to fully indulge my passion for the piano and its literature. Had I gone to music college and had to make a career from music as a young woman, I may have lost that spark, that passion. I’ve met a number of professional musicians who have expressed resentment at the heavy demands of their career, which can rob them of their love of the piano and its literature. (Admittedly, I am fortunate in that I do not have to make my main living from music: I have what is fashionably called a “portfolio career” and do several other admin and writing jobs in addition to my teaching.) Returning to the piano in my late 30s, and completing my diplomas in my mid-40s, has brought a maturity to my approach – and in the years when I wasn’t playing I was still listening to music and going to concerts, soaking up all those notes and forming my own opinions about the music I was hearing (which in turn was given a further outlet when I started reviewing concerts for Bachtrack.com).

As an adult pianist, one has the freedom to explore whatever repertoire one pleases, without a teacher bossily insisting on Czerny exercises (been there, done that) or having to play repertoire which one hates (and I suspect many of us can remember, with a shudder, the terrible/dull music we were made to learn as children). We take responsibility for our practising without recourse to others. As we mature we get to know what repertoire suits us (I was very touched at a recent London Piano Meetup Group event when a friend commented on how much a certain piece “suited” me), what we are physically, and mentally, capable of tackling, and as pianists we are incredibly spoilt by the vastness of the piano’s repertoire: there really is something for everyone! While some of us dream of playing Rachmaninov’s Third Piano Concerto to a full house at Carnegie Hall, we gain a great deal of pleasure and satisfaction from working on pieces and presenting them to others at piano clubs, meetup groups, and on courses (where one can meet other piano fanatics and where lasting friendships are forged). We enjoy the challenge of learning a Beethoven sonata, a handful of Bach’s Preludes and Fugues, or a brace of Chopin Etudes, and the sense of achievement when we gain “ownership” of our music, making it our own.

“It’s an overriding passion, not just for the music [but] for the challenge……And the challenge is constant: there’s always a harder piece, you can always take it to the next level, you’re never finished. But there’s also the fact that the piano is your friend; it’s always there. That gathers more significance as you get older: what you can express through it, in a personal language, becomes incredibly important.”

Those of us who play at a semi-professional level, advanced pianists, intermediate players, beginners, returners, “Sunday pianists” all share this consuming passion. Eavesdrop on any conversation between members of a piano group and this love is more than evident as members discuss the myriad aspects of the craft of piano: practising, repertoire, exams, concerts, performance anxiety, favourite professional performers and recordings. Because of this, professionals are often quite envious of the freedom amateur pianists have to indulge their passion, to play whatever repertoire they choose and to play purely for pleasure. 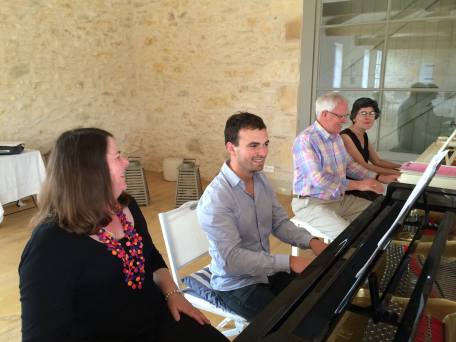 The author’s 1913 Bechstein A grand piano 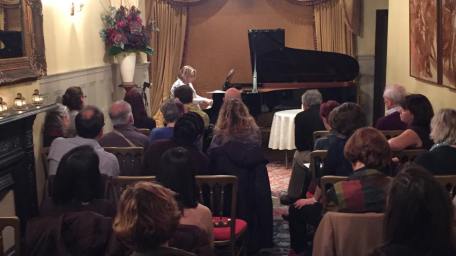 A London Piano Meetup Group event at the 1901 Arts Club

Music has known therapeutic benefits and the piano is no exception. Time spent with the instrument can be relaxing, invigorating, inspiring and comforting. A good practise session can feel as beneficial as a run – and we release the same “happy hormones”, endorphins, when we practise, as we do when we exercise. If I haven’t touched the piano for several days, I get tetchy and frustrated, and it’s the first thing I go to when I return home from a holiday. In fact, I don’t know what I’d do without it now, and I am lucky enough to possess a rather fine antique Bechstein grand piano, known affectionately as “Bechy”, who has pride of place in my living room and is treated by the rest of my family like a rather large pet.

If you are something of an “accidental pianist”, or someone who has returned to, or taken up the piano later in life, I would love to hear from you to explore this fascinating subject in more detail. Please feel free to contact me to tell me your story, or complete my Piano Notes – adult pianist interview (word document)

Amateur pianists - how has lockdown been for you?
“The thing of the world that I love most” – Samuel Pepys and ‘Musique’
Splendid new book from my talented friend @jackycollissharvey #Pepys #London #walking
Who are these exceptional amateurs and how have they achieved a standard of playing which, if presented in a blind audition, would be indistinguishable from a professional pianist?
“I just feel very lucky to be able to have a part in this wonderful process of bringing these works to more people” – Eric Lu, pianist
Hertfordshire Festival of Music 2021