One of the best things about contemporary technology is its ability to offer new ways of exploring well-trodden paths. In an earlier age, The Mozart Project, a new interactive e-book created by two non-musicians, James Fairclough and Harry Farnham, would probably come in several volumes (given its wide-ranging and comprehensive text), with innumerable footnotes, endnotes, bibliography, further reading, further listening and so forth. With the weighty tomes at one’s side, one would then have to rummage through one’s CD or LP collection to listen to the music referenced in the book. By this point, one might have tired of having to do so much additional work to experience some of Mozart’s juvenilia or a late opera.

Not so in the e-book format, for all your need to discover the world of Mozart, the man and his music, the world he inhabited and his lasting influence and perennial popularity is contained within this continuous and generously-illustrated format. Nor is this some “how cool would it be to do an e-book about Mozart?”, dreamt up by a couple of computer geeks in their bedroom over a few beers on a Sunday afternoon. Two years in the making, The Mozart Project contains a wealth of authoritative and carefully-researched material, with chapters written by distinguished academic authorities and Mozart scholars such as as Cliff Eisen, John Irving, Neal Zaslaw and Nicholas Till. Alongside this are contributions from leading figures in the world of music and opera/theatre – Sir Thomas Allen, Dame Felicity Lott, Elizabeth Wallfisch, Sir Nicholas Hytner, Sir Jonathan Miller, Simon Russell Beale and members of the Orchestra of the Age of Enlightenment, together with round table discussions with the authors led by music journalist Paul Morley. Many of these contributors offer personal insights into the music of Mozart, and provide crucial information on aspects such as interpretation, performance practice and Mozart instrumentation. The creators received funding from composer George Fenton, who is on a mission to bring a more diverse audience into the world’s greatest concert venues, and who felt that James and Harry could bring a huge amount of passion to the project.

This is more than confirmed in the final product. Its creators are not classical-music heads and I think this lends a really wide-eyed and genuine spirit of discovery and excitement to the material. There is no “dumbing down” here to appeal to the masses or those who felt Milos Forman’s film Amadeus presented a “true” portrait of Mozart as a farting fop in a pink powdered wig. The text is underpinned by scholarship, the “talking heads” and musical extracts are high-quality and professionally produced, the further reading is comprehensive (without being burdensome). Yet the material is presented in an attractive and accessible design, easy to use and never overly complex nor didactic. The text is regularly sprinkled with music extracts and spoken word, in mp3 and video format, and extra interesting titbits can be found by clicking on pictures, maps, and timelines. The book also provides exclusive access to the Mozart Autograph Vault in Salzburg and explores areas of controversy and intrigue: for example, does Pushkin’s diary confirm speculation over the Salieri poisoning? 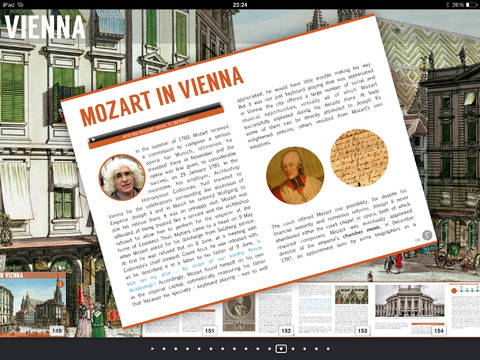 The book is arranged over 10 chapters, covering topics such as The Grand Tour (an experience which had a significant impact on Mozart), the Europe of Mozart, Symphonies, Concertos, Operas and a final chapter, appropriately, on the Requiem. There is also a whole chapter devoted to the ongoing fascination with the child prodigy, with contributions from contemporary prodigy, eight-year-old Alma Deutscher. And the book is truly interactive: readers can put questions to the authors online, and material within the book will be regularly updated. This stylish, imaginative and engaging book will appeal to music lovers, musicians and Mozart scholars alike, and at just £9.99 it represents excellent value for such a comprehensive and fascinating study of the genius of Mozart.

The Mozart Project can be purchased from the Apple iBooks store.