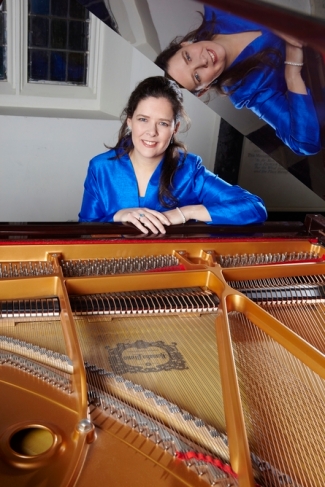 Who or what inspired you to take up the piano and make it your career?

My mother was the first major influence in my pianistic life as she saw me fiddling away on our terrible upright piano at home (which had actually been sitting in flood water in a freezing cold garage!) and decided to take me to lessons.  Her idea of taking piano lessons for a term to see how I would take to it was something I wasn’t all that enthralled about and I was convinced I wanted to learn the ‘cello instead.  The rest is history!  Later on, I was inspired by such artists as Martha Argerich, Daniel Barenboim, Emil Gilels and many others.

Who or what are the most important influences on your playing?

I was lucky enough to have fantastic teachers throughout my early years in particular (Leslie Riskowitz who started me off on the piano and Polish pianist AlicjaFiderkiewicz at Chetham’s.  I then went onto study with Joan Havill at the Guildhall).  The people I work with are also wonderful influences, in both chamber music groups and those who I have met and played to in masterclasses.  Stephen Kovacevich and Boris Berman both inspired me immensely.

Balancing everything in life and finding enough time to be with the instrument as well as remaining resilient against the odds a lot of the time.  A pianist’s life is a tough but rewarding one and simply managing to find the necessary time to practise enough whilst financing life in London and building a career is a real challenge.

What are the particular challenges/excitements of working with an orchestra/ensemble?

I find it extremely rewarding to work with orchestras and ensembles and as a pianist, there are so many wonderful concerti and chamber music works out there.  It is a truly great feeling to make music with someone else and to share the whole experience together on stage.  This is something which solo pianists can sometimes miss out on a little, generally needing to spend a lot of time alone in practice rooms to learn all those notes!

I was lucky enough to give my solo debut recital at the Wigmore Hall in 2007 and this was a truly wonderful experience.  Last year, I performed Dora Bright’s piano concerto with Charles Peebles and the Morley Chamber Orchestra, which was the first performance since the nineteenth century as well as the first ever recording of the work.  The same will be true of the ‘Variations for Piano and Orchestra’ which we are going to be recording later this year.  I was also proud to be asked to record Rory Freckleton’s piano works recently and am looking forward to the CD being ready.

How do you make repertoire choices from season to season?

Specific concerti are usually requested by orchestras but in terms of solo repertoire, I tend to play to my strengths as much as possible, whilst trying to create a balanced and varied programme.  At the current stage in my career, I am also trying to learn and perform as much new repertoire as possible, so that I come back to it having already learnt it rather than starting it afresh when I am older.

What repertoire do you think you play best?

I feel most at home with the Germans!  I particularly enjoy playing Brahms and love the bigger works such as the F minor Sonata and the two concerti.  I also think Beethoven, Schumann, Schubert, Gershwin and Ireland suit me quite well.

Do you have a favourite concert venue?

The Wigmore Hall would have to be my favourite!  I also very much enjoy performing at Edinburgh’s Reid Concert Hall, the De Montfort Hall in Leicester and at St John’s Smith Square in London.

Well this is a very hard one to answer as there are so many!  To name but a few, I would have to say Mischa Maisky, Martha Argerich, David Oistrakh, Emil Gilels, Sviatoslav Richter, Vladimir Ashkenazy, Emma Kirkby and Daniel Barenboim.    On a more personal level, there are also many musicians with whom I have had the pleasure of working over the years.

It would have to be playing at the Wigmore Hall. I also loved playing on the Greek island of Paros.  I played the inaugural recital in the new piano festival which was launched there a few years ago.  It was amazing to perform in such an idyllic setting in the most beautiful surroundings to people who had rarely been exposed to live classical music concerts.

What is your favourite music to play? To listen to?

I love playing Brahms and Beethoven in particular and also have fun playing Gershwin.  In terms of listening to music, unless I am going to a concert, I tend not to listen to all that much classical music.  I love jazz and could listen to Oscar Peterson all day.

What do you consider to be the most important ideas and concepts to impart to aspiring musicians/students?

Practise like mad when you are studying as there is never the time to do so later on.  I would also suggest learning all the major works of the repertoire and get first performances done as soon as possible, as this helps greatly when returning to them in the future.

Rachmaninoff’s 2nd and Mendelssohn’s 1st for forthcoming performances.  Then a solo recording in September.  Also, I am working at duo repertoire for a recital with the wonderful ‘cellist Brian O’Kane and at trio repertoire for a concert again with Brian and Fenella Humphreys with whom I love performing.

Having good health, a busy life as a concert pianist and having a flat on the Greek island of Paros with my partner, Maciej.  The island, despite being small, has an airport so travelling to concerts wouldn’t be a problem and the food, weather and people are wonderful there!

You are artistic director of Piano Week, launched in 2013. Tell us more about Piano Week….

Piano Week is my new festival and summer school for pianists of all ages and abilities which takes place this year at Bangor University in North Wales from 10th-15th August 2014.  I wanted to create something new in the piano world and to build an international concert platform for pianists from around the world.  I decided to launch it in North Wales as I grew up there and hadn’t heard of a pianistic venture such as this in the area before, so I decided to make it happen!  We have an international faculty lined up to give recitals and master classes throughout the 2014 festival and we are lucky enough to be supported by Blüthner who are lending us a brand new concert grand for the duration of the festival this year.  Pianist magazine recently included an article about the festival in their April/May issue and Schott Music publishers will once again be presenting a showcase at Piano Week 2014.  Please go to www.pianoweek.com for more information on the summer school and how to apply.

British pianist Samantha Ward has performed extensively around the UK and in Europe and has appeared on British television and radio several times.  In October 2007, she gave her solo debut recital at London’s Wigmore Hall and has given solo recitals in such venues as St Martin in the Fields, St John’s Smith Square, St David’s Hall Cardiff and Manchester’s Bridgewater Hall, as well as in concert halls around Europe.  Most recently, in February 2013, Samantha was invited to become a Bluthner Artist and was installed as a Freeman of the Worshipful Company of Musicians.

Samantha Ward is also the artistic director of Piano Week, a festival and summer school at the University of Bangor, north Wales. Full details here

The sea #portland #dorset #UKCoast #jurassiccoast
Antlers #interior #decoration #home #decor
“Every part of conductor’s life is challenging. From the enormity of the repertoire to the geography and travel. The most fulfilling aspect is that a conductor can spend his or her life with talented human beings and explore music of geniuses like Mahler and Beethoven, for example” #meettheartist #interview with #conductor Paavo Järvi #nhksymphonyorchestra https://crosseyedpianist.com/2020/02/17/meet-the-artist-paavo-jarvi/
“a treasure trove for both amateur and professional pianists.... imaginative, beautifully crafted and unpredictable” The #piano #music of Howard Skempton #composer #contemporarymusic https://crosseyedpianist.com/2020/02/03/the-piano-music-of-howard-skempton/
“I have allowed myself to live life and take the time to learn life from a wide array of experiences, to find where my truth lies and why I even bother being a musician” #MeetTheArtist #interview with #pianist @georgelepauw https://crosseyedpianist.com/2020/02/13/meet-the-artist-george-lepauw-pianist/
My son’s cat Naboo #tabbycat #tabbycatsofinstagram #feline