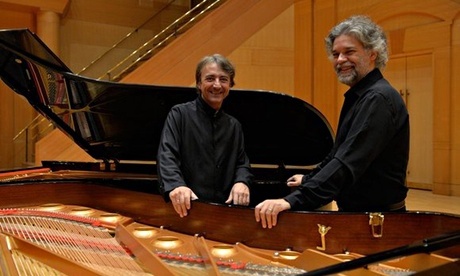 Hot on the heels of the release of their new disc of works by Bartók, Debussy and Stravinsky for two pianos, French pianists François-Fréderic Guy and Jean-Efflam Bavouzet returned to London’s Wigmore Hall to present a programme of music featuring these composers. Three 20th century orchestral scores written within just four years of one another – Bartok’s Two Pictures, Debussy’s Jeux and Stravinsky’s The Rite of Spring – were brought to life in a concert replete in colour, rhythmic vitality, sensuality and split-second precision.

I first heard Guy and Bavouzet perform Jeux and The Rite of Spring in 2012 in a concert which brought fire, daring and vertiginous virtuosity to a weekday lunchtime at the Wigmore. To hear the same pianists in the same repertoire three years later was revelatory, for it seems as if the music has matured, like a good wine. This second performance was slicker, yet full of even greater spontaneity and vibrancy.

The piano music of Olivier Messiaen is not performed enough for my taste, partly because there aren’t that many pianists around who are willing to tackle it. One notable exception is British pianist Peter Donohoe, who studied with Messiaen’s second wife Yvonne Loriod, and who played the composer’s music to the composer himself during his studies in Paris in the 1970s.

The concert at London’s Institut Français, part of the three-day It’s All About Piano Festival, was originally to include the London première of La Fauvette Passerinette, a work fully sketched by Messiaen in 1961 which was discovered by Peter Hill, who worked with Messiaen between 1986 and 1991, and which Hill completed in 2012. Sadly, Peter Hill was unwell, and so the work was introduced by Elaine Gould from Faber Music and Peter Donohoe, who played brief, appetite-whetting extracts, and relayed some interesting and entertaining anecdotes of his studies with Monsieur and Madame Messiaen, and his experiences of performing Messiaen’s music. Benjamin Frith stepped in at the last minute to perform Messiaen’s Visions de l’Amen with Peter Donohoe