Still only a tender three year old, the London Piano Festival, organised by pianists Charles Owen and Katya Apekisheva is already a significant part of the London piano concert calendar, an event much looked forward to by myself and piano friends. In just three years it has grown from a weekend festival to a 5-day extravaganza and it looks set to extend further, such is the quality and variety of its programmes and performers. The secret of its success and evident popularity (judging by the commitment and enthusiasm of the audiences) lies in a simple formula: an impressive line up of pianists, imaginative programmes and a friendly atmosphere. Owen and Apekisheva curate the festival and also perform in it, thus creating a wonderful sense of common purpose, very much music with friends, for friends, and amongst friends. This year the young Russian pianist Pavel Kolesnikov stole the show, at least as far as I was concerned, in both his solo concert on Saturday afternoon (review here) and his performance with his duo partner Samson Tsoy which opened the 2-piano marathon on Saturday night.

While last year’s 2-piano marathon had a rather epic sweep to its programme, this year’s was more thoughtful, the main focus being the centenary of Claude Debussy’s death, and the tone was set by the opening works, Schumann’s Six Pieces in Canonic Form, performed with exceptional control, poetry and musical maturity by Pavel Kolesnikov and Samson Tsoy. It would be hard to match the exquisite intimacy of this performance, but the great thing about the 2-piano Marathon is that each pianist brings their distinctive voice to the repertoire performed, the pairs of performers sparking off one another, collaborating and interacting with evident enjoyment. Two works by Arnold Bax provided an impressionistic follow up to the Schumann, expressively played by Margaret Fingerhut and Charles Owen. Three works by Poulenc offered further contrasts, the triptych closing with his joyous l’Embarquement pour Cythere. The first half closed with Stravinsky’s Concerto for Two Pianos, a work which requires lightning-fast reflexes, masterfully played by Kolesnikov and Tsoy. It was good to see this extraordinarily mature duo together in more extrovert music.

The deliciously sensuous post-interval works by Debussy – En Blanc et noir and Danse Sacree et Danse Profane – were welcome bookends to Thomas Ades Lisztian Concert Paraphrase on Power Her Face, which while expertly played felt over-long and self-indulgent. It was good to see Stephen Kovacevich grace the stage once again at this year’s festival, side by side with Charles Owen in Debussy.

The closing work, Rachmaninov’s Russian Rhapsody for two pianos, was memorably played by Konstantin Lifschitz (who gave a solo performance earlier in the festival) and Katya Apekisheva, and left us with a hummable foot-tapping folk tune for the homeward journey.

Plans are already well underway for the 2019 London Piano Festival and full details will be announced in the new year.

My first evening at Chetham’s International Summer School ad Festival for Pianists – or Chets – as it is affectionately called, offered me the opportunity not only to meet piano friends, make new connections and experience the unique Chets vibe, but also to enjoy three fine recitals by professional pianists, who are all members of the teaching faculty at this year’s summer school.

Canadian pianists Megumi Masaki is a keen advocate of contemporary and new piano music, with a specialisation in exploring interactions between sound, image and movement. Her concert featured three works which used electronics and live video art to create a unique audio-visual and multi-sensory experience. Two works, ‘Corona’ and ‘Touch’, by Canadian composer Keith Hamel opened and closed the recital. Both utilise electronics, gesture tracking, interactive visuals and interactive computer processing and the live electronics and visuals react to one another so that each performance is unique. ‘Corona’ depends on the sound of the piano to create the visuals (an abstract sequence of shapes suggesting the planets) and because the video is generated by the piano and is completely interactive, each performance is unique. Musically, this piece had shimmering filigree passages redolent of Debussy and the processional quality of John Adams’ ‘China Gates’, but the additional layers of sound created by the electronics created mesmerising almost orchestral textures. Throughout, Megumi’s clarity and precision of touch and musical sense was clear, making this piece atmospheric and uplifting.

Keith Hamel’s ‘Touch’ utilised similar technology, with the addition of balletic gestures by the pianist to create wondrous shimmers of sound. The work is inspired by bells and all the harmonic material is derived from the analysis of bells and change-ringing patterns. Once again, the piano sound combined with the electronics offered beautiful haloes and extraordinary layers of sound.

These two works book-ended another piece by a Canadian composer. Douglas FINCH’s ‘Epiphanies’ is inspired by the short stories of Alice Munro in which a character has a moment of sudden inspiration or revelation which happens at unexpected times in the narrative. Compared to Keith Hamel’s pieces, this suite of four movements had a spare elegance and understated grace, and the interplay between piano and words, with live interactive visuals by artist Sigi Torinus, was engaging and at times unsettling, almost portentous.

The second concert of the evening gave me my first experience of Stoller Hall, Chetham’s new multi-million pound concert venue. It’s a really beautiful contemporary shoebox hall, light and airy and finished with pale wood and stone, with an impressive acoustic. This was the setting for Norwegian pianist Einar Steen-Neckleberg’s performance of Bach’s remarkable Goldberg Variations – one of the high Himalayan peaks of the piano repertoire and an epic journey for player and audience. This was a highly personal and romantic account, with each movement shaped to highlight its individual character. This had the effect of suggesting each movement was a stand-alone work in its own right, and was particularly effective in the G-minor variations, especially the last one, which had a poignant intimacy. When the Aria returned, it was as if it came from another place, yet was wholly familiar. 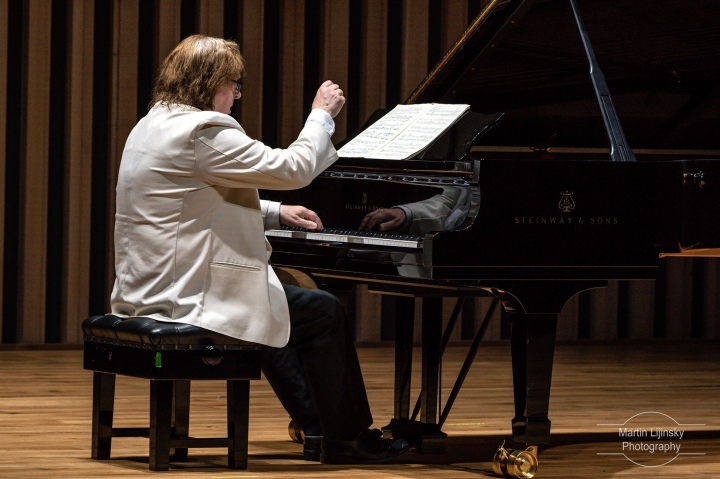 The final concert of the evening given by Bobby Chen and Douglas Finch in repertoire for two pianos. I have heard this piano duo before and I was once impressed by their pitch perfect timing and precision and musical understanding, so much so that one forgets there are two pianists playing as the music is given absolute priority. Rachmaninoff’s Suite No. 1 was lush, liquid and transparent, with elegant natural phrasing and a wonderful sense of ease, which I am sure comes from deep familiarity with the work and a special synergy between the two pianists. The second work was by the little known English composer Arnold Griller (look out for a new disc of his music on the Toccata Classics label for which Douglas Finch wrote the liner notes). His ‘Introduction, Cakewalk and Allegro’ opened with a rather sensuous section, redolent of 1920s cocktail jazz, before lively sections with rhythms reminiscent of ragtime and shifting moods, at times witty, then serious. It was vibrant and colourful and handled with understated panache by the performers. The final work, ‘Hapsburg Burlesques’ by Douglas Finch, was written at the time of the Brexit referendum and includes quotations and transcriptions of Rosenkavalier, Mahagonny, When You Wish Upon a Star, Shostakovich’s 8th String Quartet, and even the British National Anthem. With its intricate weaving of recognisable themes and rather decadent character, this work was both stylish and slightly surreal, but without any sense of irony or pastiche. For an encore, Bobby and Douglas performed Rossignols, written as a wedding dedication, and based on Granados’ The Maiden and the Nightingale, from Goyescas, a delicate, intimate miniature.

But unlikely or daring juxtapositions can create interesting and unexpected contrasts and connections, as one work shines a new light on another, enriching both listener and performer’s experience – and this was certainly my take on this remarkable concert by Pierre-Laurent Aimard and Tamara Stefanovich at St John’s Smith Square which combined Brahms’ Sonata in F minor, Op 34b with Messiaen’s Visions de l’Amen.

If there are connections to be made between the music that made up this large-scale programme it is that both works are mighty musical edifices, two great mountains which transcend mere notes on the page and which demonstrate each composer’s wish to remain in long moments of emotional distress, relaxation or ecstasy. Both works also display a high level of perfectionism in their structures and organisation, replete with many details, motifs and musical pathways which could easily become blurred in a lesser performance.

“If I can give just one person joy with my playing then that’s success to me”
Divine Fire - the Story of #Chopin and #GeorgeSand in music and words
“We absolutely adore the blended sound of our renaissance instruments which sound like a magnificent organ when played together, especially in church-like acoustics”
Our digital #brochure is now available to download from our website. Do take a look for full details of this year’s artists and events, plus helpful local information https://www.hertsmusicfest.org.uk/performances-and-events-2021 #music #concerts #chambermusic #musicfestivals #summermusicfestival #hertfordshire
Reflections on the water in a still Portland marina #sea #seaside #reflections
Draught Guinness. At the pub! With @__max__wilson__