Who or what inspired you to take up the piano, and make it your career?
Growing up in a house where the piano was always being played by my mother and grandmother was very influential. I just wanted to join in all the time!

Who or what were the most important influences on your playing?
Mozart Concert Rondo for Piano and Orchestra K382. I played this with a chamber orchestra when I was 13. The expressive d minor variation has a 4 bar piano solo before the orchestra joins in; in the rehearsal I was suddenly aware of the orchestral sound swelling around me, carrying me with it, and hooking me for life.

And I was fortunate to have inspirational teachers, Roy Shepherd and Stephen MacIntyre, who had studied with legends such as Cortot and Michelangeli, and also to study with Ronald Smith.

What have been the greatest challenges of your career so far?
Having moved around a lot, it has always been a challenge to retain former contacts and performance opportunities as well as forging new links in a new location. As part of the research before we move, I have always checked out what’s on where, and started to make contacts with likely promoters.

In this digital age the exciting challenge has been to use the internet and social networks as part of that process, without the limitations of physical geography.

Which performances/recordings are you most proud of?
I was delighted to mark 2011, Liszt’s Bicentenary, by recording his Annees de Pelerinage  – Italie on CD, by writing a blog about the music, and by performing his works in concerts in the UK and Australia.

In 2012, the year of the London Olympics, I will be performing in the world premiere and recording of ‘The Same Flame’, a song cycle of 5 songs based on the Olympic values of Courage, Inspiration, Excellence, Friendship, and Respect and Equality, for massed choirs and piano, with words by Matt Harvey and music by Thomas Hewitt Jones. And I’ve been the pianist on the soundtrack of 3 Olympic Mascots animated films featuring Wenlock and Mandeville, with a story by Michael Morpurgo. It’s always exciting to be involved in something new, fresh and contemporary.

Do you have a favourite concert venue to perform in?
Anywhere with a good piano and a receptive audience!

Favourite pieces to perform? Listen to?
Liszt is always a favourite, and Chopin. I listen to a very wide range of music, often choral, orchestral and operatic, as it broadens my aural horizons and colours all that I play.

Who are your favourite musicians?
Musicians who serve the music they perform, and who make me think – ‘I must get the score and see what the composer wrote there.’  Even better if they are pianists, and if they make me think, ‘I have to learn that piece!’

What is your most memorable concert experience?
In 2009 I gave a charity recital in Mbabane in Swaziland. The local piano teacher’s upright piano could not be transported to the venue, so I played Moussorgsky’s ‘Pictures at an Exhibition’ on a Yamaha Clavinova. Whenever there was a silence in the music, the sounds of the African night floated in through the open windows – frogs and crickets.

What do you consider to be the most important ideas and concepts to impart to aspiring musicians?
Never give up – priceless advice from Churchill.

What are you working on at the moment?
I’m working on pieces by Debussy, whom I think of as being ‘The French Connection’ between Chopin and Liszt. I’m playing two of his studies, dedicated to the memory of Chopin, as well as Masques, and La Plus que Lente.

What is your most treasured possession?
A Maelzel metronome belonging to my grandmother. It set a musical pulse for her, for my mother, for me, and now for my children.

Christine Stevenson enjoys a distinguished career as a piano recitalist and concerto soloist throughout the UK and abroad. Winner of the prestigious Dom Polski Chopin competition, her wide experience extends from making the premiere recording of Alkan’s Rondo Brillant with members of the London Mozart Players, to being the pianist on the soundtrack of the latest animated film featuring the 2012 Olympic Mascots. 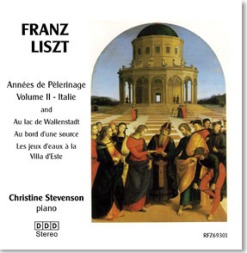 Recent projects in the UK and in Australia have included concerts and broadcasts celebrating Liszt’s bicentenary, and the release of Christine’s recording of ‘Années de Pèlerinage – II – Italie’  on CD and iTunes, which has received excellent reviews. Recitals this season explore ‘The French Connection’ – Debussy, his influences and contemporaries, and Christine is currently blogging her way through an ABC of Debussy’s piano music at notesfromapianist

In July 2012 Christine will be the pianist in the world premiere performance and recording of ‘The Same Flame’, a song cycle based on Olympic Values for massed choirs and piano, with words by Matt Harvey and music by Thomas Hewitt Jones.

An inspiring communicator, she is on the staff of the Junior Department of the Royal College of Music in London, and is a tutor at the annual Hereford Summer School for Pianists. She has given masterclasses at Morley College, Hindhead Music Centre, Jackdaws Music Education Trust and the City Lit.

Born in Melbourne, Christine graduated from the Victorian College of the Arts with distinction, being twice awarded the Gaitskell prize for the most outstanding student. She studied with pupils of Cortot, of Nadia Boulanger and of Michelangeli, and with the celebrated English pianist, Ronald Smith, also participating in masterclasses given by Sergei Dorensky, Aldo Ciccolini and Vlado Perlemuter.