Facebook was abuzz with reminders of George Li’s touchdown in the Bay Area’s glittering Davies concert hall, a venue that absorbs a splash of pastel beams from the neighboring flagship government building. Glass panels reflect back montages of color that provide a rush of excitement for ticket holders slipping into seats right under the bell.

FB “friends” and faithful George “followers” were page-alerted to a ‘meet and greet’ event in the lobby following the recital. It would be a shower of support for a pianist we’d seen and heard by livestream from exotic locations including Moscow and Verbier. Frames in progress had included George’s Silver Medal triumph at the Tchaikovsky International Piano Competition, magnified on computer screens around the world!

From my humble perch in Berkeley, I’d set aside 75 conscientious minutes to get to Davies Hall. It was a conservative travel measure, given lax Sunday train schedules and my propensity to get mired in Civic Center traffic as a clueless pedestrian in foreign urban terrain. (San Francisco’s maze of complex street crossings and intersections, bundled in congestion, had always seriously confused me, impeding on-foot progress in any direction).

Yet, despite well-intended, precautionary travel efforts, I couldn’t have anticipated a vexing single platform BART crisis that launched a crescendo of complications right up to my shaky finish line arrival at Davies. There, at its entrance, my concert companion/adult piano student stood patiently, dispatching block-to-block text messages to keep me on track.

With good luck and concerted teamwork, we made it to our first tier balcony seats just as George advanced toward a shining model D Steinway grand.

It was a pure bliss erasure of prior travails:

Melted deceptive cadences rippled through a crystalline rendering of Haydn’s B minor Sonata (No. 30) as trills and ornaments immaculately decorated clear melodic lines in a liquid outpouring of phrases. The middle Minuet movement was charmingly played passing with grace to a culminating Presto in brisk, bravura tempo with unswerving attention to line, shape, and contour.

Li’s singular sound autograph permeates his performances amidst an array of varying nuances and articulations. He has what pianist, Uchida terms “charisma” and a singular tonal personality.

Meaning and musical context are core ingredients of Li’s artistry and his wide palette of colors are at his liquid disposal through deeply felt effusions of expression. (While Li is a natural, intuitional performer, his sensitive fusion of aesthetics and intellect is always on display, exposed, as well in media interviews.)

The Davies Hall recital, continued after Intermission with a rippling roll-out of works by Rachmaninoff and Liszt, all imbued with a permeating spirit of mature music-making that’s intrinsic to Li’s ongoing ripening process. And as a cap to a memorable evening of inspired artistry, George played his final encore – a pyro-technically charged Bizet/Carmen transcription that drove listeners to their feet in a chorus of BRAVOS!!!

(This snapshot was provided by a friend who had permission to publicly post it, thanks to Li’s generosity and that of his representatives)

In a culminating MEET and GREET event, post-recital, audience members had an opportunity to share IN PERSON enthusiasm and appreciation of George’s artistry, while purchasing the artist’s newly released CD.

For me, a tete a tete with George, provided an opportunity to thank him for his generosity as a teen when he delivered well-conceived responses to my reams of technically framed questions about practicing, technique, and repertoire.

Finally, here’s an encore of gratitude to George for his inspired love of music, and for his reach into our hearts with each memorable performance. Come back soon!

Shirley Smith Kirsten is an American pianist and teacher who blogs at arioso7.wordpress.com 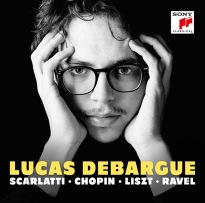 Escape all the noise and fall out of Brexit and the Conservative Party leadership wrangling with this exquisite debut disc by Lucas Debargue, the young French pianist who came fourth in the prestigious Tchaikovsky International Piano Competition in 2015.

Weightless elegant Scarlatti opens this album which was recorded live at the Salle Cortot in Paris, Debargue’s first concert in his hometown after the competition. His sense of pacing, evident in the Scarlatti sonatas, really comes to the fore in his reading of Chopin’s Fourth Ballade, where he balances delicacy and poetry with drama to create a performance which is both intimate and expansive. The real impact comes when he holds the music in suspense: it feels natural and unpretentious. His performance of Gaspard de la Nuit, the work for which he received much enthusiastic acclaim during the competition, is equally impressive. His clarity of touch and tone combined with that wondrous pacing brings a silky sensuality to ‘Ondine”s watery arabesques while ‘Scarbo’ is less grotesque, more puckish and playful, though no less dark for it. In between these movements, ‘Le Gibet’ is seven minutes of restrained desolation. His Liszt is a proper waltz instead of the headlong frenzy some pianists give to this work. The Grieg is like an encore, a calming salve after Liszt’s twirling rhyhms. The Schubert is as intimate as you like, as if Debargue is playing just for you – and playful too, reminding us that Schubert was a composer of dances and Ländler. And in a neat piece of programming the album closes with Debargue’s variation on the Scarlatti Sonata in A which opens the album.

At the Tchaikovsky Competition, the Moscow Music Critics Association awarded him their prize for “the pianist whose incredible gift, artistic vision and creative freedom have impressed the critics as well as the audience”, and his debut disc demonstrates these attributes in spades.

If you would like to contribute a review to ‘If You Listen to One Thing This Week….’ please contact me here

Readers who enjoyed Peter Donohoe’s lively and very well-observed diary of his participation in the Tchaikovsky Competition in Moscow in 1982, published on his website earlier this year, and his selection of ’50 Great Pianists‘ as part of the BBC’s Piano Season, will relish his account of his visit to the Leeds International Piano Competition this year. In it, he discusses, in part, the merits of not coming first (Peter was himself joint silver medallist at the Tchaikovsky Competition, and has subsequently gone on to enjoy an acclaimed international career). Like his Moscow diary, this is a detailed and insightful account, which will appeal to anyone who has followed the competition with keen interest.

It’s thirty years since British pianist Peter Donohoe won joint silver medal at the 1982 Tchaikovsky Competition in Moscow. Hard to believe now that at that time Russia was still the Soviet Union, under the iron rule of an old guard communist leadership, when people’s rights and freedom was severely restricted and when visiting foreigners, such as Peter and his co-competitors, were treated with suspicion and were subjected to close surveillance.

To mark the thirtieth anniversary of his fine achievement, Peter has published his Tchaikovsky Competition diary on his blog. It’s a fascinating document, charting not just the highs and lows and daily anxieties of participating in an international competition, but also an insightful and entertaining glimpse behind the iron curtain. Despite the fact that we know the final outcome, this is a thrilling account.