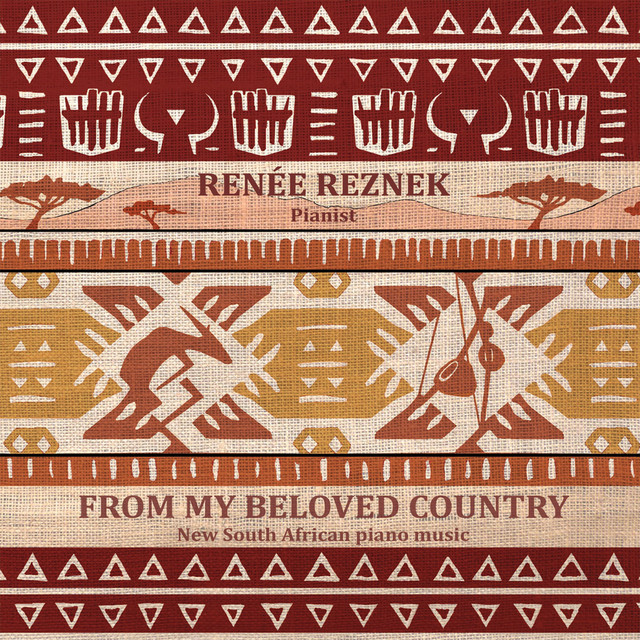 The first is Renée Reznek‘s new disc From My Beloved Country: New South African Piano Music, which features works by Neo Muyanga, Kevin Volans, Michael Blake, Rob Fokkens, Hendrik Hofmeyr, Peter Klatzow, David Earl and David Kosviner. Some of the works were commissioned by Reznek, including ‘Hade Tata’ (Neo Muyanga, 2013), composed in honour of Nelson Mandela. It opens with a haunting 4- note dirge motif which provides the theme for this programmatic piece whose title translates as “sorry, father”. Written as a tribute to Mandela on the 20th anniversary of South Africa’s first democratic elections in 1994, the music is suffused traditional Sesotho and Zulu music with Ethiopian melismatic style, jazz and western classical music idioms. It celebrates Mandela’s childhood, his release from prison, and the weight of expectations placed upon him following his release to create a new South Africa.

Kevin Volans’ ‘PMB Impromptu’ (2014) was written “as a little tribute to Renee Reznek’s amazing fingerwork”. It appears to reference the minimalism of composers such as Reich and Adams, but it also pays homage to Debussy in a reworked passage from l’Isle Joyeuse, and Sindling’s ‘Rustle of Spring’. Reznek’s clarity and tonal colour really brings this music to life.

Volans’ ‘A Garden of Forking Paths’ is taken from his Progressively Prickly Piano Pieces, part of a graded series for players of all ages. Here, tonal control and sensitive use of the piano’s resonance create a piece whose meditative mood contrasts perfectly with the previous work.

Two works by Michael Blake from his six-volume cycle Afrikosmos reference Eastern Cape uhadi music, and the connection between this and Bartok’s Mikrokosmos, much of which draws on the folk music of his homeland. Meanwhile, Rob Fokkens’ ‘Five Miniatures’ also explores South African music, but in a concentrated form. These pieces offer ‘micro-studies’ in melody, rhythm, tonal palette and texture.

Partita Africana (Hendrik Hofmeyer) is one of the longer works on the disc. Darker in character, it merges the Baroque prelude and fugue with elements found in African music, including the pentatonic scale, repetitive melodic elements and irregular pulse. It’s an imposing work which evokes the vastness of the African plains.

Peter Klatzow’s ‘Barcarolle (Arnold Schoneberg in Venice)’ is a moody, atmospheric work which commemorates Schoenberg’s visit to Venice in 1925, and the piece includes motifs from the second of his Three Piano Pieces op 11. Reznek highlights the music’s inherent lyricism with a warm sound and sensitive pacing.

‘Song Without Words’ (David Earl) has a personal association for Reznek – it was composed as a wedding present for her daughter and was played during her wedding ceremony. It has the charm and lyricism of a song without words by Mendelssohn, with hymn-like elements in keeping with the ceremony. Earl’s ‘Barcarolle’ was also written in celebration of a family event: commissioned by Reznek on the occasion of her daughter’s engagement, the piece owes something to late Liszt in its haunting, rolling motifs and dramatic climaxes before the music settles into more peaceful waters. These works are played with great warmth and affection by Reznek.

The final work on the disc is ‘Mbira Melody’ (David Kosvner) which celebrates the African “thumb piano”, a instrument consisting of a wooden board with staggered metal keys, which are plucked with the thumbs. Redolent of Volan’s ‘PMB Impromptu’, it is also minimalist in style with its repeating figures and perpetuum mobile character. It ends with a witty chord.

This varied and imaginative collection of piano music reflects the influence of Western European music on South African composers, while also paying homage to the folk music and vernacular of the country. Reznek’s very personal affinity with the highly varied musical idioms presented in this collection is clear from the warmth and ease which is evident throughout, yet she is alert to the myriad moods and characters of each piece, creating an album which is both refreshing and revelatory.

From My Beloved Country is available on the Prima Facie label

Scottish pianist Christopher Guild‘s second volume of piano music by Ronald Stevenson could equally be subtitled “From My Beloved Country….”. Although born in Blackburn in Lancashire, Stevenson’s father was a Scot, and the composer settled in the Scottish Border village of West Linton, south of Edinburgh. Scotland proved to be one of the profoundest influences on his life, and this album attests to that: it contains music directly influenced by or drawn from Scottish landscape, heritage and culture, together with works inspired by his creative friendships with other musicians. The album also contains several premiere recordings, including ‘Three Scots Fairy Tales’ which reveal Stevenson’s concern to create attractive and enjoyable music for young piano students. Christopher Guild responds to this by playing the pieces not as simplistic children’s music but instead brings great charm to these miniatures, highlighting their musical sophistication – for example, ‘What the Fairy Harper Told Me’ has Debussyan idioms and offers practise in the use of the sustaining pedal over rolled chords, as well as developing a sweet tone.

The most substantial work on the disc is ‘A Carlyle Suite’ (1995), written to celebrate the bicentenary of the birth of Thomas Carlyle. It’s a hommage to Carlyle from different viewpoints, and not only those which look directly at Carlyle himself. The second movement, for example, portrays an imaginary recital between Chopin and Jane Carlyle in Chelsea in 1848. Motifs and fragments drawn from Chopin’s mazurkas and a Valse Triste, all presented in a Bel Canto style, mingle with allusions to distinctly Scottish idioms. The seven movements of ‘A Carlyle Suite’ which follow are a ‘Study in historical styles on Frederick the Great’s theme’ (used to J S Bach in the ‘Musical Offering’), a set of variations which explore different musical devices and styles, from a French Baroque Overture (Var. 1) to a variation which evokes Debussy’s tonally ambiguous soundworld (the uninformed listener could easily mistake this for Debussy’s own music) with its whole tone scales and piquant, colourful harmonies.

One of the premiere recordings on the disc is of ‘Rory Dall Morison’s Harp Book’ (1978), a group of eight pieces which Stevenson transcribed from the harp book of the blind harper, Rory Dall Morison (c.1676-c.1714), who was born on the isle of Skye. Stevenson brings striking harmonisations and textures, and a simple poignancy to these simple folk melodies, and Christopher Guild’s crisp articulation and attention to detail evoke the sound of a harp, while his warm cantabile sound reminds us that these pieces are undeniably piano works.

Just as on his first disc of Stevenson’s music, Christopher Guild brings a keen sensitivity to the music’s varying idioms and moods – from sprightly dances to the spacious romance of the Hebridean Seascape, there is much to enjoy from Guild’s assured touch and colourful soundworld. Recorded at Turner Sims Hall in Southampton, the piano tone is bright with a warm, rounded bass which really suits this music. Comprehensive liners notes by Christopher Guild accompany the disc, which include touching reminiscences of his meetings with Stevenson. And if you choose to purchase the album as a download, Toccata Classics have helpfully included a download of the liner notes on their website.