My first clarinet teacher, Frank Holdsworth who was Principal Clarinet with the Bournemouth Sinfonietta was my mentor from the beginning and he continued to give good advice even when I became a Principal player myself in the Philharmonia Orchestra. As a child I liked the way music could make me feel and I seemed to be good at it too so I really had no doubts that it was the right path for me.

All the great musicians you meet along the way have an effect on developing your own musicianship and I have been fortunate enough to play with most of the world’s great musicians.

Getting a job, keeping it, making it work with family life and making enough money.

I recorded the Mozart Concerto and solo directed it, Stravinsky’s Ebony Concerto with Robert Craft and Chris Gunning’s concerto too. Orchestrally I like my playing in VW’s Norfolk Rhapsody with Philharmonia/Slatkin but usually I can’t stand listening to myself play.

Those that reflect the human condition

Other people tend to do that

The Suntory Hall in Tokyo and the Philharmonie in Berlin are both good examples of modern concert halls and the Musikverein in Vienna has the classic shoebox shape so loved by musicians.

Pavarotti in Hyde Park. Princess Diana was there in the pouring rain and we were recorded for Decca. It was part of my trial period for the Philharmonia so I felt a lot of pressure especially as I had a big solo to play from Tosca.

Leave ego behind as much as possible and serve the music.

A great meal with fine wine with my family

Michael Whight performs with The Lisney Trio in Messiaen’s Quartet for the End of Time at the Purcell Room at London’s Southbank Centre on Monday 9 March. The programme also includes Beethoven’s ‘Archduke’ Trio. Further information and tickets

Michael Whight has a varied career as an orchestral player, soloist, chamber musician, recording engineer and producer, conductor and teacher.

A former Principal Clarinetist with the Philharmonia Orchestra and Royal Philharmonic Orchestra, he has also played guest Principal with all the London orchestras as well as the Royal Concertgebouw Orchestra, Chamber Orchestra of Europe and Gothenburg Symphony Orchestra. Conductors he has worked with include Giulini, Maazel, Abbado, Levine, Ashkenazy, Sawallich, Sinopoli, Salonen, Sanderling, Svetlanov, and Harnoncourt.

Alongside some 200 orchestral recordings are Stravinsky’s Ebony Concerto with Robert Craft and the Philharmonia Orchestra, the concerto by Christopher Gunning ( of Poirot fame) and the Mozart Concerto which he directed from the basset clarinet with the Royal Philharmonic Orchestra. This was voted ‘the top of current offerings’ by International Record Review. He also collaborated with John Adams in performances of his concerto Gnarly Buttons in San Francisco conducted by Kent Nagano. As a session player he has appeared on the soundtracks for films such as Lord of the Rings and the Harry Potter Series and can regularly be heard on TV series such as Father Brown and Granchester. Michael is also the clarinetist on the theme tune for Coronation Street.

Michael was the first British winner of the International Clarinet Congress Competition and won the woodwind prize at the Royal Overseas League. He was invited by Valery Gergiev to play in the World Orchestra for Peace. As a conductor he has given concerts with Northern Sinfonia, and the Royal Philharmonic and Pohang Symphony Orchestras.

Michael also has a growing career as a recording engineer and producer. He has recorded and produced for the Naxos and Toccata Classics labels and mixed a soundtrack for BFI/Miramax, in conjunction with the Library of Congress. Michael has also produced two soundtracks for wildlife films, one for Austrian TV/Schlamberger and the other for Netflix/Silverback Productions. This year will see the launch of his own recording label, Marlie.

Michael is Professor of Clarinet at Trinity Laban in London

While many of us missed the QEH and Purcell Room during their closure, St John’s Square, not far away on the north side of the river, near Westminster, has benefited from increased exposure as it has been the home of most of the SBC International Piano Series concerts and some chamber recitals too, and it is good to see this fine building now firmly on the map of London concert venues. Meanwhile, the newly refurbished QEH and Purcell Room look fabulous, judging by these pictures, and details such as French polished wood, hand-upholstered leather and aluminium seats and energy efficient climate control promise stylish comfort for the contemporary concert goer. The original brutalist concrete structures have been fully restored and the foyer area (previously rather grim despite attempts at funky lighting) has been revitalised with plenty of natural light  and better views of the Thames

The Queen Elizabeth Hall and Purcell Room open with a programme of events paying tribute to the historic legacy of the venues, and the legendary artists who have performed there over the past fifty years. A dynamic blend of contemporary and classical work sees vibrant performances, events, installations and a free programme of activities for all ages. The reopening programme runs from Monday 9 April until the end of May 2018. Further details here

London-based Venezuelan pianist, and champion of Venezuelan composers for the piano, Clara Rodriguez returns to the Southbank Centre on 10th December for a concert of music by South-American composers, including Villas-Lobos, Piazzolla and Ruiz, and Debussy. This promises to be a really wonderful evening of music, not just for piano, but for ensemble too, as Clara will be joined by Wilmer Sifontes on percussion, cellist Jordan Gregoris and violinist Ilya Movchan. The concert also features two London premieres of works by Colombian composer Germán Darío Pérez.

I reviewed Clara Rodriguez and friends at Purcell Room last autumn, and Clara also features in my Meet the Artist interview series. Read her interview with me here. And here is Clara in her own words about her forthcoming concert:

All concerts at the Southbank are special events, the magic of one evening only, the energy, imagination and love that goes into putting the programme together is part of our artistic proposal to the world. My concert on Monday December 10th at the Purcell Room is going to be another exciting yet very different experience to the other nine or ten ones I have played there in the past.

The high inspiration, poetry and skill behind all the pieces I am playing makes my heart jump with emotion. Just reading Verlaine’s Clair de lune poem makes me realize even more deeply about the beauty of Debussy’s Suite Bergamasque, which I could play for ever!

Your soul is a chosen landscape
Charmed by masquers and bergamaskers
Playing the lute and dancing and almost
Sad beneath their fanciful disguises.

Even while singing, in a minor key,
Of victorious love and fortunate living
They do not seem to believe in their happiness,
And their song mingles with the moonlight,

The still moonlight, sad and beautiful,
Which sets the birds in the trees dreaming,
And makes the fountains sob with ecstasy,
The tall slender fountains among the marble statues!

I have always been interested by the output of contemporary composers, their loneliness and their bravery in expressing their truths out on paper, apart from appreciating their talent, of course. On this occasion I will première three preludes by the young Venezuelan composer Mirtru Escalona Mijares who lives in Paris and has kindly dedicated the last of the Three Short Preludes to me. It is based on a tanka by the buddhist monk RYOKAN (1758-1831), it is called “…contempler longuement…” in it I have to use special concentration skills to play pianissimo and very slowly as opposed to our usual kind of preoccupation which is to play fast and lots of notes. Mirtru has been working very hard in purifying or cleansing musical phrases and thoughts. It is a challenge! Here is the poem the third Prelude is inspired by:

“Hommage à Chopin”, a tour de force written by Villa-Lobos will follow. It is a strange piece, not exactly romantic, I think it has the force of the Amazonian jungle and depicts Chopin’s passionate torments and obsessions. It has a greater number of melodic layers than most piano pieces thus making it quite virtuosic.

It was while studying with Nadia Boulanger in Paris that Piazzolla was urged to develop his love for tango thus creating the “new tango” in which he transformed this old Argentinean dance into music capable of a variety of expression, fusing sharply-contrasted moods: his tangos are by turn fiery, melancholic, passionate, tense, violent, lyric and always driven by an endless supply of rhythmic energy. I am thrilled to be able to play Le Grand Tango, one of his most Classical pieces, and then in the same evening The Four Seasons of Buenos Aires with leading young performers from France, Jordan Gregoris on the cello and from Russia, Ksenia Berenzina on the violin. You’ll see what exquisite pair of musicians they are. We are having the fun of our lives playing this music. It is luxury!

Not forgetting my Caribbean roots, I have added three composers from that part of the world, for two reasons, my dear London public expects it and simply because I have so much joy playing them. So, from Cuba a nostalgic Danzón by José María Vitier, who composed the music for the film “Strawberry and Chocolate”, then two London premières will follow by a composer from Bogotá, Colombia, Germán Darío Pérez, in which my friend percussionist Wilmer Sifontes will play the kind of percussion that should accompany a bambuco and then we’ll play together the very lively Zumba que zumba (joropo) written for me by the Venezuelan composer Federico Ruiz, in which Wilmer will play the Venezuelan maracas. I doubt it if this programme could be more exciting or varied! 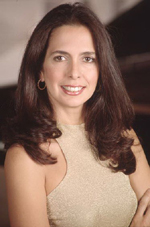 London-based Venezuelan pianist Clara Rodriguez and friends brought the heady and exotic rhythms and sounds of South America to a windy Southbank in a delightfully relaxed concert of chamber music at the Purcell Room. Read my review for Bachtrack.com here