A minute’s silence can feel like a long time when one is required to stop and focus on that time passing – as at 11am on Remembrance Sunday, for example. John Cage’s most famous and most controversial composition, 4’33”, at just over four-and-a-half-minutes, is surprisingly long when one is at a performance of it. Such is the way that this work is presented, one is required to listen, and focus on the performance just as one would any other piece of music performed in a concert.

In the last 18 months, I’ve been to three performances of Cage’s comment on what constitutes “music”, and an important example of conceptual art. The first was last summer in a performance by American pianist Adam Tendler, at which everyone in the tiny exclusive audience knew exactly what was going on (thanks in no small part to Adam’s fascinating introduction to the work – read about the performance here). The other performances have been this year, given by pianist Annie Yim as part of her MusicArt “conceptual concerts”, which combine music, words and art. Each performance has been unique, the experience determined by performer, location and audience, just as Cage intended.

Last week I attended Annie Yim’s latest MusicArt event, a Conceptual Concert in Three Acts, which drew inspiration from the creative collaboration between John Cage and American artist Robert Rauschenberg. The concert took place in a private gallery in Mayfair where Rauschenberg’s “spreads” collages were on display (full review here). Cage’s work was the final act, the finale. At this performance, I felt I came closest to the very first performance of 4’33”, and watching the audience’s reaction was rather fascinating. 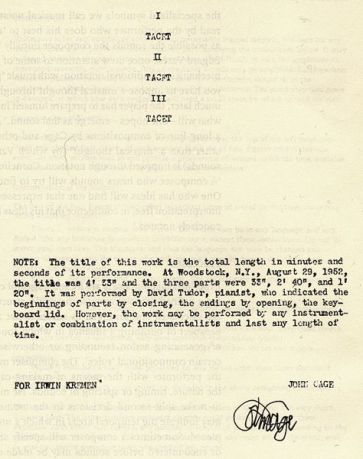 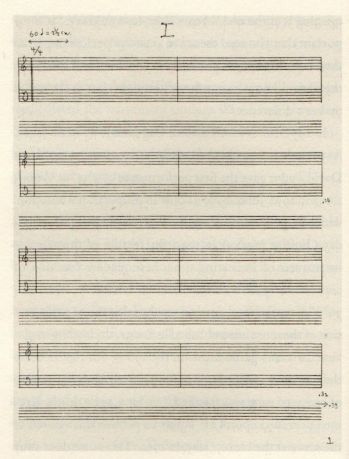 As specified by the composer, the piano lid was closed and then raised to signal the start of the work – and subsequently closed and raised to indicate the separate movements (4’33” is scored in three movements). Large mirrors sited on either side of the piano allowed us, the audience, a sense of being on stage with the performers, which created an interesting and witty suggestion of “audience participation”, and reflected our reactions back to us – something I think Cage would have thoroughly enjoyed. As the piece moved inexorably through its silent bars, the ambient sounds of the gallery, the noise of the street outside (including a rather musical motorbike starting up), the constant rumble of a vibrant big city at nighttime, and the living, breathing audience all infused the performance. The audience was not the usual concert audience – many were friends of the gallery, as far as I could ascertain – and some were distinctly unsettled or confused by this “music” which was apparently completely silent (except of course it isn’t!). Ahead of me, a woman looked around anxiously, as if seeking some kind of reassurance that all was well from her fellow audience members. On the front row, someone tapped, somewhat impatiently, their ring on a wine glass, thus creating another note to complement the motorbike. There were embarrassed titters of laughter, some sighing and coughing, quickly suppressed as befits good concert etiquette. Behind me, about 3 minutes in, someone clapped, trying to pre-empt the end of the performance, but no one else joined in and the performers adhered assiduously to Cage’s directions, the work ending when the appropriate time had elapsed and the piano lid was finally closed.

This, for me, was the best performance of 4’33” I have attended so far – because it did exactly what Cage intended and proved that the work still has the power to intrigue, amuse and provoke.

“They missed the point. There’s no such thing as silence. What they thought was silence, because they didn’t know how to listen, was full of accidental sounds. You could hear the wind stirring outside during the first movement. During the second, raindrops began pattering the roof, and during the third the people themselves made all kinds of interesting sounds as they talked or walked out.”
– John Cage, speaking about the premiere of 4’33”

So why is 4’33” so provocative? When John Cage conceived it, in the years immediately after the Second World War, he was attempting to remove both composer and artists from the process of creation. Instead, by asking the musicians specifically not to play, Cage allows us, the audience, to create our own “music”, entirely randomly and uniquely, by listening to the noises around us during four minutes and thirty-three seconds of “silence”, and removing any pre-conceptions or pre-learned ideas we may have about what music is and how it should be presented, perceived and received.

Presenting the work in a gallery full of Rauschenberg’s art was also significant for it was Rauschenberg’s white paintings – seemingly blank canvases simply covered with white paint – which initially inspired Cage to create 4’33” and which, like Cage’s work, rely on the ambiance of the space in which they are presented to bring them to life. There are parallels with other visual artists too, including Carl André and Marina Abramovic, both of whose work explores the relationship between artist, artwork and audience.

But perhaps the most significant aspect of 4’33”, especially in our fast-paced, 24/7 21st-century world, is that it forces us to pause, to really listen, and encourages a special kind of in-the-moment focus, common to the practice of meditation.

My second visit to the Performance Space at City, University of London, and a second performance of John Cage’s infamous 4’33”. Last summer I heard a “straight” performance – the pianist silent yet fully present at the piano while the audience absorbed the myriad sound of the space; this time the piece was complimented by poetry – ‘A Kind of Silence’ by Ed Baker, and a reminder that Cage’s work was conceived with the idea that any sound constitutes “music”.

This was part of an intriguing and highly original concert by pianist Annie Yim in which music and words combined to reveal “tributes, friendships, and artistic affinities” (AY, programme notes). Annie is the creator of MusicArt London, a conceptual concert series which combines music with poetry and visual arts, creating interesting and unexpected dialogues and connections between the works in the programmes and across creative disciplines. Programmes include works by 21st century composers, juxtaposed with historical masterpieces. In this concert, Annie played music by Debussy, Ravel, John Cage, Arvo Pärt, Cheryl Frances-Hoad and Philip Glass, interspersed with readings from poems which sparked a musical impulse or which were written in response to music.

The concert opened with Annie reading Baudelaire’s Harmonie du Soir, a line from which Debussy drew inspiration for his Prelude Les sons et les parfums tournent dans l’air du soir (Sounds and perfumes turn in the evening air). To hear the words of the poet which influenced the composer created a quite different listening experience when the music began. This prelude is deeply sensual, rich in pungent harmonies and languid rhythms as Debussy’s responded to Baudelaire’s equally evocative and musical writing.

It is well known that Ravel drew inspiration from poetry for his Gaspard de la Nuit, and Aloysius Bertrand’s book of poems appealed to Ravel’s love of fairy tales. He set three of Bertrand’s poems to music – Ondine, Le Gibet and Scarbo – and printed each poem in full next to the piano score. Once again, Annie read the poem, seated at the piano, before launching into a characterful and vibrant portrayal of the grotesque gnome, “his fingernails scratching on the silk curtains round my bed!” 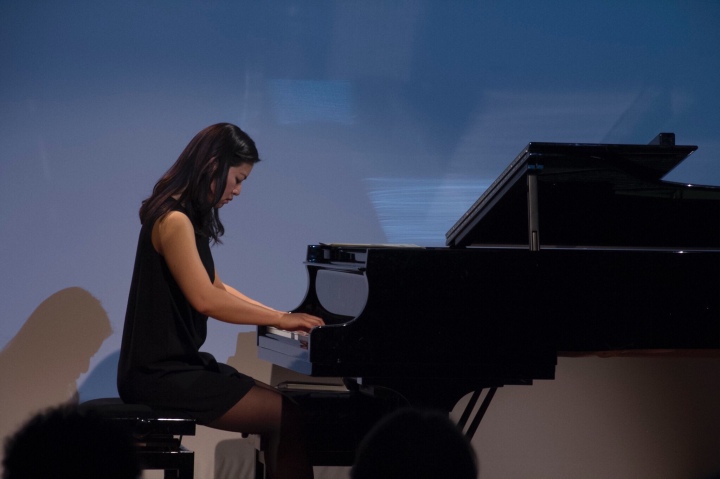 John Cage’s Dream, a minimalist work scored on a single stave music consisting of groups of tones that are freely sustained (either by holding the keys down or by using the sustaining pedal); the degree of resonance (as determined by the performer) creates the rhythmic and narrative flow of the piece and takes the listener into an otherworldly sense of time suspended. A gentle work, rather like a haiku in its simplicity and depth of expression, it was elegantly and sensitively played by Annie, accompanied by a reading of John Cage’s poem to Merce Cunningham (for whom the music was written) Poem. Cause: I love you. A rather touching addition to this performance was a projection behind the piano of Cage’s original typed manuscript of the poem.

And so to the performance of 4’33” where while the pianist remained silent and still at the piano, a recording of poet Ed Baker reading his ‘A Kind of Silence’ was played. This version of 4’33” was originally conceived in 2016 for a performance in an art gallery on the premise that “silence is musical – silence is poetic – silence is music is poetry“. In our frenetic world it is remarkable how long 4’33” feels and rather than “filling the silence”, the words and cadence of the poem offered special time for reflection and quiet contemplation.

This connected appropriately with Pärt’s Für Alina, a work whose “aesthetic is silence…..present not just as the silence framing the piece, but, paradoxically, silence has been written into the music as an acoustic space of sorts” (Kristina Korver, musicologist, Arvo Part Centre). Poet Zaffar Kunial wrote ‘Sunlight’ in response to the music, a short yet meaningful poem which perfectly complimented the simplicity and profundity of Pärt’s writing: “each line can be read after a pause or as a continuous train of thought” – just as Pärt gives few directions to the pianist as to how his piece should be played. This new poem was specially commissioned by MusicArt London and was reproduced in a delicate limited edition card, designed and handmade by the book artist, Pauline Rafal,

Cheryl Frances-Hoad‘s contemplative miniature Star Falling was composed “as a gift in an attempt to stop a partner from leaving me” (CFH) and is a calm reflection on lines from Else Lasker-Shuler’s poem ‘Reconciliation’. Delicate and expressive, with shimmers of star light, it was accompanied by the composer reading the poem which inspired her. 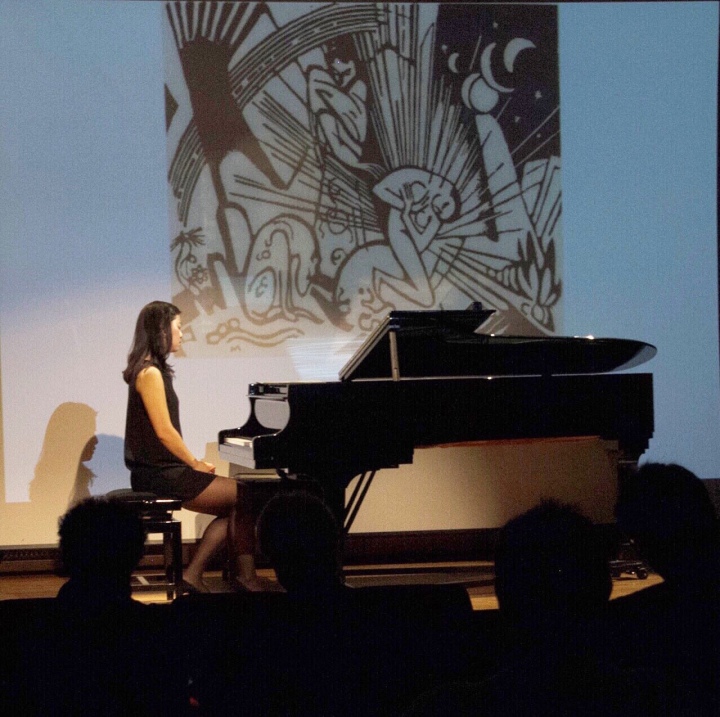 The final work in the programme was Philip Glass’s Wichita Vortex Sutra. which Glass wrote for a performance with poet Allen Ginsberg, whose poem of the same name (written in 1966) reflected the anti-war mood of the times. Glass’s music was intended as a portrait of America, complete with fragments of hymn tunes and the energy of the big city. At this performance, a collage of Ginsberg’s words was read by Ed Baker, who had selected sections from the poem to reveal his own response, as an American, to Ginsberg’s poem and Glass’s music. Annie performed the work with energy and commitment, bringing to a close this most interesting and engaging lunchtime concert.