At Investec Opera Holland Park (OHP), we have recently announced a special memorial gala event to mark the first anniversary of the dreadful Grenfell Tower tragedy and to remember its victims, especially our friend Debbie Lamprell who perished in the fire. By the time of the concert an inscribed stone in her memory will have been laid on the theatre site.

As many know, OHP became entangled in the political fall-out of Grenfell but we have now spoken and written about that period extensively and feel no need to revisit the matter. Our immediate response was to give a performance of Verdi’s Requiem in aid of The Rugby Portobello Trust (RPT), who were in the eye of the storm at the time, and it is to them that the proceeds of the Hope For Grenfell gala will go. The charity, with which we have had a long association, will this time use the money raised to look forward, to help young people explore the countryside and coasts away from the inner city. The whole evening is dedicated to trying to look forward, with hope. A year on from the disaster, we will bring together members of the community, both in the audience and on stage, to show how even in the midst of such darkness, healing can – and must – begin. We believe music is, and will always be, a major catalyst for the expression of hope, memorial and healing. 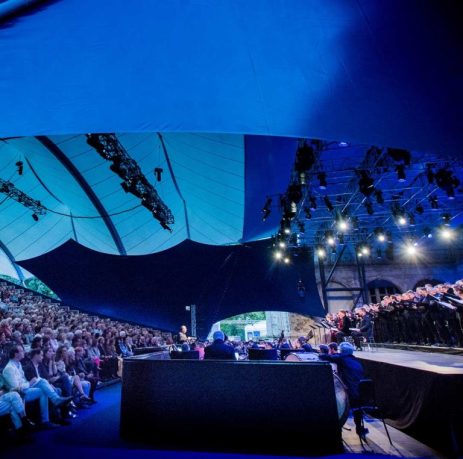 We know from bitter experience that healing is a long process and that hope is not easily fostered or acquired. We are still regularly in touch with Debbie’s mother and her recovery has scarcely begun. The pain is still raw and she, as her daughter had been, is now adopted into the OHP family, whose care and protection of her is unlikely to end anytime soon. Such is the nature of grand tragedy whose tendrils spread far and wide; there are thousands of people in a position similar to hers who have to manage the daily, grinding relentlessness of grief. Yet even in these circumstances, there comes a time when we have at least to attempt to draw inspiration for the future, when human instinct tries to extract something good from awfulness. We feel that we, along with those at RPT whose job it is to begin to master the reparative process, want to offer some hope.

The concert itself is on 13th June and will bring together many of our casts from the season in extracts from operas. There will also be readings, remembrance and a choir, drawn from local schools and other services and coached by Gareth Malone, will sing a new piece composed by Will Todd. We will announce more details in the coming weeks.

The money raised will fund RPT’s summer ‘residentials’, when kids from the community are taken out of the city to the countryside or the coast where they have space to think, breathe the air and learn new skills. For some, this is their only chance to escape the concrete surroundings of their home environment. RPT found itself right at the centre of the Grenfell tragedy and became a hub for the community in the immediate aftermath of the disaster, going on to act as the central distributing charity for the funds that were raised. This role is one that the charity was never set up to perform but it did so with dedication. But the resources it utilised need to be replenished; their wider activity in the North Kensington community did not stop and we hope this concert will make a significant contribution to this vital ongoing work.

The concert will also be Opera Holland Park’s way of remembering our friend Debbie. Her death in the fire had a profound affect on all of us and continues to do so, but we intend to honour her memory as best we can with music she loved and in a place to which she was utterly dedicated.

The Hope for Grenfell Memorial Gala, in memory of Debbie Lamprell and all the victims, will feature full scenes from OHP’s productions of La traviata and Cosi fan tutte, performances of classic arias by guests from across the operatic world, and an original composition by Will Todd, performed by a community choir led by Gareth Malone.

Tickets for the Grenfell memorial concert are available now via www.operahollandpark.com

Investec Opera Holland Park’s 2018 season will run from 29 May to 28 July. Full details of productions at www.operahollandpark.com