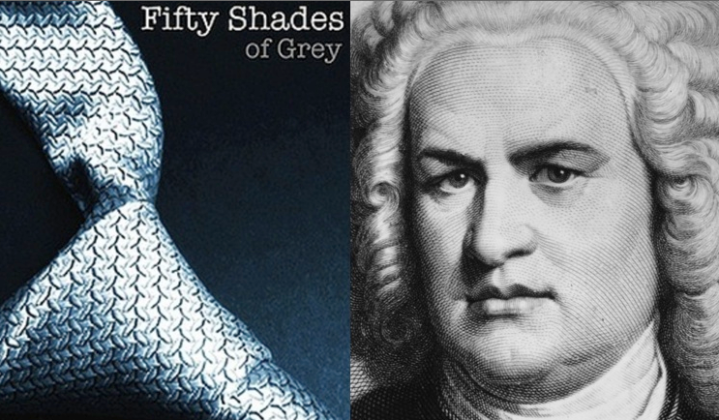 50 Shades…. has been responsible for sending Thomas Tallis’s wonderful, soaring 40-part motet Spem in Alium to the top of the classical music charts (it’s the piece Christian Grey, the controlling, BDSM-obsessed ‘hero’ of the book, is listening to the first time he seduces our ‘heroine’, the irritatingly immature Anastasia). Another piece which has enjoyed a resurgence of interest thanks to the book is the ‘Adagio’ from J S Bach’s Concerto in D Minor after Marcello, BWV 974. Christian Grey, who is not only drop-dead gorgeous and richer than Croesus but also a talented amateur pianist (natch), is playing this piece (naked at the piano, I might add) the first morning-after-the-night-before:

I hear the music.The lilting notes of the piano, a sad sweet lament……

Christian is at the piano, completely lost in the music he’s playing. His expression is sad and forlorn, like the music. His playing is stunning……I listen enraptured. He’s such an accomplished musician….

When he’s finished, Christian tells Anastasia that it is Bach’s transcription of an oboe concerto, originally by Marcello.

I first came across this arresting piece on the soundtrack of a French film called ‘Je Te Mangerais’ (in English ‘Highly Strung’) about a couple of French lesbians (one of whom is a pianist), which I saw just after I’d done my ATCL Recital Diploma in December 2011. I was looking for some repertoire to keep me occupied while I was waiting for the exam results, and, by a neat coincidence, the entire Concerto was on the repertoire list for the LTCL, which I decided to attempt after I’d received my ATCL result.

It is the pure beauty of the Adagio, a limber solo melody over a hypnotic, repeating bass line, that makes it so compelling: a serene oasis between a witty, rhetorical opening movement and a Presto finale, an exuberant 3/8 romp, scored almost entirely in semiquavers.

Bach transcribed 16 instrumental concertos by other composers for solo harpsichord during the 1710s. Six were originally works by Antonio Vivaldi. Alessandro Marcello lacked the style and innovation of Vivaldi, and it is possible that Bach selected this concerto to transcribe to test his own skill and adaptive ingenuity. Bach’s transcription, like its original, is in the usual three movements of an Italian concerto. The shell of the first movement is clearly Marcello’s work, though Bach is quick to thicken the lean textures of the original, particularly in the middle of the movement where the writing is very dense.

In the Adagio, the right hand melodic line is highly ornamented, suggesting improvisation, and is perhaps an opportunity for Bach to show off the emotional possibilities of the harpsichord, as well as the technical prowess of the keyboard player. When I first started learning it, I was also working on Chopin’s Nocturne in E, op 62 no. 2, a piece in which a beautiful simple melodic line is decorated with ornaments and fiorituras. Chopin revered Bach, and learning the two pieces concurrently demonstrated the influence and inspiration Chopin drew from JSB.

As for playing the piece, a soft, light right hand and arm is crucial to achieve a beautiful singing tone in the melody. Keep the mordents and trills quite leisurely/lengthened, and the demi-semiquaver bars relaxed to create a sense of improvisation. I like to spread some of the chords – e.g. bars 5 and 13. Keep the LH chords soft – “floating chords” where the keys are depressed just enough to create sound – and think 3 in a bar (rather than 6 quavers). Throughout, the piece needs to ‘breathe’, so observe Bach’s phrasing where marked (there is limited phrasing in my Barenreiter edition) and don’t overdo the drop slurs (e.g. at bar 18), and don’t push the LH. Remember, this is 5 minutes of serenity between two dramatic and exciting outer movements.

For me, the benchmark recording of this work has to be Glenn Gould’s. His treatment of the ornaments is particularly fine, and the rest of the Concerto is splendidly orchestral. James Rhodes has also recorded the Adagio but to my mind it is an overly contrived, self-conscious reading of the piece. A quick trawl around Spotify threw up some other interesting interpretations of the work, including a ‘cello version with Rostropovich, and a rather smooth, “lounge” style improv by Gabriela Montero. When studying the concerto, it is worth listening to Marcello’s original to hear how Bach has handled the orchestral writing, and where he has stripped out material to highlight the capabilities of the harpsichord.

Download the score of the complete Concerto in D minor BWV 974 from IMSLP. For a simplified version of the score, click here

Spem in Alium by Thomas Tallis