To coincide with the release of her new recording of Mozart Piano Sonatas Vols 2 and 3, I caught up with pianist Orli Shaham to find out more about her influences and inspirations and why one of her most treasured possessions features Snoopy the dog….. 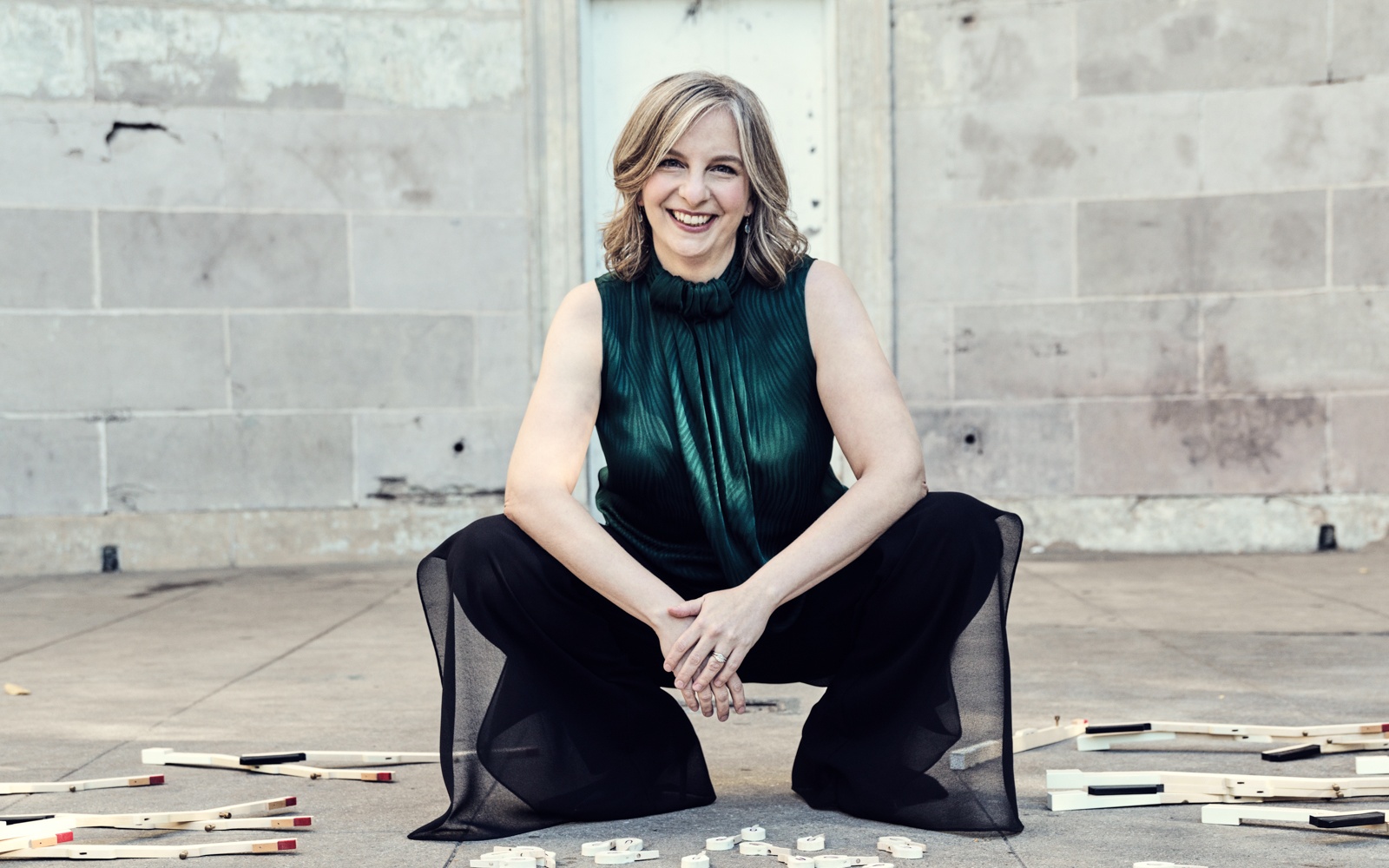 Who or what inspired you to pursue a career in music and who or what have been the most important influences on your musical life and career?

It was my parents and my older brothers who inspired me to start music more than anybody else. My parents listened to a lot of music, and my older brothers were just enough older that they were beginning to be accomplished at instruments when I was coming into consciousness. I just really wanted to be part of that and be able to play with them and do the same sort of things that they were doing. That was very much the source of the initial inspiration. I also went to an untold number of conservatory concerts to listen to my brothers perform, and then also heard the 49 other pianists or violinists who were on the same program. That was hugely inspirational too.

A big part of my influences are the people in my life who also love music and who also play music. For me, that’s changed over time from being my elders to being my children and my students. I find them all incredibly inspiring.

Ultimately, it’s always the last project you just finished that you’re most proud of, because on some level you feel like it’s better than everything you’ve done before. I have certain highlights throughout my career that I think back on quite fondly. At the moment, I’m riding high on recording the complete Mozart sonatas. That was a monumental mountain to climb. I loved every minute of it, and I learned so much from doing it.

Which particular works/composers do you think you perform best?

I would say whatever I’m doing at the moment, which this year has included a lot of Mozart, and a lot of Clara Schumann and her compatriots. With any luck, we keep getting better at all of them – that’s the hope.

That’s a really tough one because you have to choose repertoire quite far in advance. I have to project what I think I will feel like playing 18 months from today. Eighteen months is a long way to plan for your emotional state. These days, 18 minutes is a pretty long way.

I’m so lucky to be a pianist; I have so much repertoire to choose from. I have a list that I haven’t even begun to skim the surface of, of pieces that I would like to play. So I just go down that list based on what I think would work best next.

I have a favorite concert venue to record in, but I’ve never actually performed there. It’s Mechanics Hall in Worcester, Massachusetts. I love recording there because there’s something about the atmosphere of the building that makes me feel like it’s all about whatever I’m creating on stage (and also there’s an enormous painting of George Washington and the rear end of his horse looking down on me from high above the stage). The hall has an incredible sound. For pianists, performing or recording at a venue is intricately tied up with the venue’s piano. I really love the instrument at Mechanics Hall, as well as the technician who takes care of it. Any time I sit down at that keyboard, I’m inspired to experiment.

That’s a very long list. One that I happen to be thinking about recently was with David Robertson and the St. Louis Symphony. I played John Adams’ Century Rolls in Carnegie Hall. The way schedules worked out, the composer couldn’t come to hear any of our performances before that; the first time he could come and hear it was at the Carnegie concert. I was only the second pianist to play that concerto at the time, and there was a great deal of nervous energy.

The orchestra did a magnificent job, and David was incredible. Everything worked, and it was fabulous. When John came on stage for his composer’s bow, he leaned in to me and said, “You got it, you really got it.” There’s really no better feeling as a performer, than for the composer to say, “You got it.” That’s what it’s all about.

I should add that I’m very much looking forward to playing John Adams’ second piano concerto, Why Must the Devil Have All the Good Tunes? in Finland next season, with the Finnish Radio Symphony Orchestra, and the self-same David Robertson conducting.

Being a mother of infant twins was a big challenge. We’ve made it through to the other side – those twins are about to turn 15. Things are a lot a lot less intense than they were 15 years ago around this time. I think it’s true for many parents, certainly for a lot of mothers, that it’s tricky figuring out how to keep your commitment to music while also juggling a commitment to family, both of which are all-consuming.

What do you do off stage that provides inspiration on stage?

I do things that have to do with music, like teaching and listening to repertoire other than what I’m working on, which is very inspiring. I also specifically do things that don’t have to do with music. I’m inspired by books I am reading, or TV shows I am watching, or meditation or cooking, that really allow me to get inside my own head in a different way than when I’m getting inside a composer’s head.

The not so trite answer is that we musicians don’t have such a definition, because we never think that what we’re doing is good enough, so it can’t possibly be considered a success. Knowing that there will never be a feeling of complete and total success, I set very specific goals for myself, and if I can make those work for an entire performance, then I feel it’s been a success.

Those are often really small things. I had a shoulder injury a few years ago and one of the things that I’ve been working on is maintaining a certain level of muscle relaxation in my upper back, even in performance, from the beginning to the end. That’s no small feat. It has nothing to do with the actual music making, and it has everything to do with the actual music making. When I achieve that, I feel a huge sense of pride, because I know that’s something I wasn’t able to do before.

What advice would you give to young/aspiring musicians?

My biggest piece of advice is that whether other people give you the opportunities you’re hoping for is completely out of your control. But whether you feel that you are constantly improving is entirely in your control, and that way of approaching things will sustain you through the lulls and heartbreaks of a career.

What do you feel needs to be done to grow classical music’s audiences?

There are really two sides to that question. One, how do we get the next generation to understand that classical music is for them? That’s in part why I started Orli Shaham’s Bach Yard, to get to children at the ripe old age of three or four years old. The other side of it is making sure that what you’re presenting to the audience is relevant to their lives in some way. That may have to do with repertoire choices, it might have to do with venue choices, perhaps programme lengths, and the way that you introduce a programme to an audience and explain to them how it connects to them. It’s all about humanizing the musicians and the composers and making people feel that this is something that is actually designed for them and that they can partake of whether they’re three or 30 or 99 years old.

What’s the one thing in the music industry we’re not talking about which you think we should be?

It’s the question of what’s in it for them: What’s in it for your audience? What’s in it for the students? What are they going to get out of that and through their lives? What’s in it for a subscriber or a single ticket buyer? Why are we actually doing this? Because we in the industry get so caught up in the fact that we love it so much, we see what it’s doing for us that we forget to think about the perspective of the people we’re trying to offer it to.

I have two favourite possessions. One of them is the Steinway B that’s been with me since 1997, 25 years. I don’t know how I would get it out of the apartment if there’s a fire.

My other favourite possession is the cartoon that Charles Schulz made for me in 1997 – also 25 years ago. It’s a one-panel strip where Schroeder is playing the Beethoven’s “Pathetique” sonata and the final bar line is missing, so the notes are all falling on the ground with their stems up. Poor Snoopy is trying to walk across the floor and the note stems are pricking his little feet, and he’s saying, “Ouch!”

Volumes 2 and 3 of Orli Shaham’s recording of the complete Mozart Piano Sonatas are available now on the Canary Classics label.

A consummate musician recognized for her grace, subtlety, and brilliance, the pianist Orli Shaham is hailed by critics on four continents. The New York Times called her a “brilliant pianist,” The Chicago Tribune referred to her as “a first-rate Mozartean,” and London’s Guardian said Ms. Shaham’s playing at the Proms was “perfection.”

Orli Shaham has performed with many of the major orchestras around the world, and has appeared in recital internationally, from Carnegie Hall to the Sydney Opera House. She is Artistic Director of Pacific Symphony’s chamber series Café Ludwig in California since 2007, and Artistic Director of the interactive children’s concert series, Orli Shaham’s Bach Yard, which she founded in 2010.