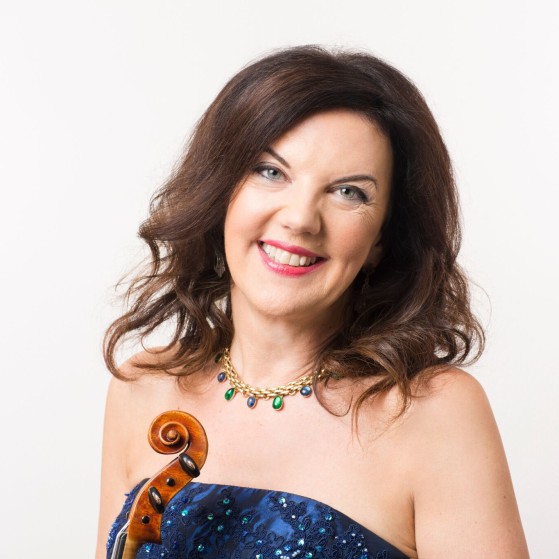 It was quite by chance – I feel ill with chicken pox and was bored so I began to teach myself the recorder. I really loved playing an instrument and when I was better, I started the piano and the violin

Yehudi Menuhin was a huge influence of course…..but I think that all the teachers at school had their own influence and we learned from all of them. Since leaving school and performing professionally, many conductors have influenced me, especially Richard Hickox and Sir Andrew Davis

Performing the Ligeti violin concerto – it’s hugely difficult and really challenges the player in every way!

I am very proud of my Elgar concerto with Andrew Davis and Royal Scottish National Orchestra. It won a Classic BRIT Award and I felt very happy as I waited a long time to record it, so I felt I gave my very best.

I’d like to think that I am able to bring some insight into every composer that I choose to perform. If I don’t feel an empathy with a composer or piece, I prefer not to play it! I’d rather leave it to people who like it, and play the things that I like most. That said, I have a huge repertoire so I haven’t exactly limited myself!

There are various factors to consider – who I’m playing with and the repertoire that they like. Orchestras often have their own ideas regarding repertoire and then I like to learn new pieces every year so I am always programming new things.

I adored playing in Carnegie Hall – the floorboards are alive with history, it’s so inspiring!  I was playing with Simon Rattle and the Berlin Philharmonic Orchestra so I was in amazing company!

It’s hard to choose because I have had so many fantastic experiences but probably my concert in the Royal Albert Hall at the Last Night of the Proms – the atmosphere was so amazing and so friendly! I also enjoyed playing for 40,000 people in Hyde Park – very exciting indeed to see all those faces!

My definition of success is simply to be playing to the very best of my ability.

The most important thing is to be yourself. Anything less than that will come across as un-natural and superficial so it’s important to be authentic

I’d like to be enjoying a career in broadcasting, as well as some motivational speaking, plus finding some time for hobbies and seeing plenty of my friends and family!

Tasmin Little performs at Music at Paxton with pianist Piers Lane on 23 July in a programme including music by Schubert, Brahms, Ireland, Vaughan Williams and Franck.

Tasmin Little has firmly established herself as one of today’s leading international violinists. She has performed on every continent in some of the most prestigious venues of the world, including Carnegie Hall, Musikverein, Concertgebouw, Philharmonie Berlin, Vienna Konzerthaus, South Bank Centre, Barbican Centre and Royal Albert Hall, Lincoln Center and Suntory Hall.