I’ve always loved the ceremony of nine lessons and carols from the Chapel of King’s College, Cambridge. For me, someone who doesn’t really “do Christmas”, the opening notes of Once in Royal David’s City signal the start of Christmas.

The Christmas “music” which fills shops, cafes and other spaces in the run up to the festive season is mostly trite and trashy with irritatingly catchy tunes which quickly become an unshakeable earworm.

Christmas carols are, however, another kind of music, in a special, much-loved league of their own. Aside from the poetry of their texts, there are the lovely memorable melodies (some carols such as In the Bleak Midwinter have several versions) and rich harmonies, often underpinned by wonderful organ playing. I’m not a churchgoer, but I do love the music of the Christmas festival. 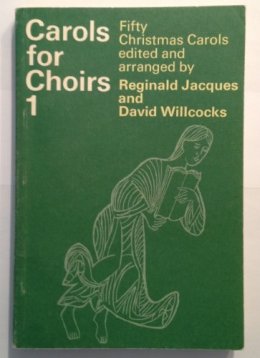 When I was at secondary school in the early 1980s (a large state comprehensive school in Hertfordshire), we always performed Handel’s Messiah at Christmas and a few days later had our own ceremony of nine lessons and carols, performed in the church next door to the school by the senior choir and orchestra, pupils and staff (the Headmaster always read the final lesson, booming “IN THE BEGINNING WAS THE WORD…!” at us in stentorian tones). In addition to traditional carols (marked “All” in the service sheet), we sang other Christmas songs, many of which were taken from ‘Carols for Choirs’ (my particular favourites were Adam Lay YBounden (Boris Ord’s version) and Torches by John Joubert). I loved singing in the choir and playing in the orchestra, with that special sense of common purpose and a shared enjoyment and excitement in the music we were performing.

At the time, the huge amount of music which went on in my school was taken for granted. The school prided itself on its music provision and I remember this was one of the main factors which influenced my parents’ decision in applying to the school – and I’m very glad they did. The music department was run by an energetic and hugely committed teacher, (whose enthusiastic teaching inspired me, in part, when I became a piano teacher, and who retired only a few years ago). As well as two choirs and orchestras, a madrigal choir, recorder group and various other smaller ensembles, there was plenty of provision for instrumental lessons (I learnt the clarinet so that I could join the senior orchestra), plus opportunities to go on European tours with the orchestra or sing at the Royal Albert Hall (as I did when I was about 15).

Looking back, I now realise that I was very privileged to have access to and be surrounded by so much music at school, and also at home, and to be encouraged in my love and practice of music by inspiring music teachers and supportive parents. Music was very much a part of my day-to-day life and I never considered it particularly special or privileged (though I was teased a lot at school for being “good at music”). With the serious erosion of music provision in our state schools, what I enjoyed in my teens is now very much the preserve of a comfortable middle-class upbringing, and music and music lessons are in danger of becoming the exclusive preserve of the better off.

The benefits of learning a musical instrument are well-documented and I have observed and experienced many of them at close quarters through my teaching and my own studies when I returned to piano lessons as an adult. Learning a musical instrument equips us with important life-skills. If you can perform in a student or school concert or a public music festival, you can also stand up before a room of people and give a paper at a conference. Music stimulates brain function and can improve memory, cognitive and motor skills, concentration, time management and organizational skills, and creative thinking. Playing an instrument is both stimulating and therapeutic, as the physical activity of playing releases the same “happy hormones” (endorphins) which sportspeople enjoy. Learning and playing a musical instrument fosters self-expression, and can bring a deep sense of fulfillment and personal achievement. Meanwhile, playing in an ensemble, orchestra or band, or singing in a choir, offers a wonderful sense of a shared experience while also encouraging team building, sociability and cooperation. For children with special needs or learning difficulties such as dyslexia and ADHD, music can offer an important outlet and allow them to shine when they may be struggling in other areas of their school life.

We need music, and we need committed, skilled and enthusiastic people to encourage and train the next generation of musicians and to foster an appreciation of and excitement in music, whatever the genre. The devaluing of music, along with the other arts, by former education secretary Michael Gove and continued by the current encumbent and this philisitine government in general, is an outrageous attack on a crucial aspect of our cultural landscape and heritage. Music and arts education is simply not safe in this government’s hands.

We need music. Support music in schools, music hubs, local ensembles, national orchestras. Encourage your children to learn music, sing in a choir, join a band, form their own band, go to concerts, talk to musicians. Write to your MP and urge him or her to take music education seriously. Listen, engage, and above all enjoy. Please.