Concerto night is a regular feature of the Chetham’s International Summer School and Festival for pianists, and on Sunday 19th August, we were treated to four concertos, performed in the magnificent Stoller Hall by members of the Chets teaching faculty, who also happen to be international concert pianists.

The concerto is one of the greatest corners of the pianist’s repertoire. A showcase for performer and instrument, it’s an opportunity for the composer to capitalise on the combined forces of soloist and orchestra, often with thrilling and highly expressive results. The concerto format inspires great music and is a spectacle for the audience and the genre continues to tempt composers today. The romantic image is of the soloist doing battle with the orchestra, but in most instances piano and orchestra are collaborators, creating wondrous musical conversations and exciting contrasts of sound, texture and mood – very much the case in the four works performed in this concert.

The soloists in these concerts were accompanied by the Stockport Symphony Orchestra, an amateur orchestra of considerable talent and stamina, conducted by Stephen Threlfall, who is a member of staff at Chetham’s School.

Seta Tanyel gave a committed and colourful account of Richard Addinsell’s Warsaw Concerto, a one-movement work of grand romantic gestures and post-Rachmaninov melodies. Written as part of the soundtrack for the 1941 film Dangerous Moonlight, the music has a dramatic narrative, rich in nostalgia and sweeping climaxes. This was followed by Tchaikovsky’s Piano Concerto No. 2 in G Major, played by Leslie Howard, always a popular member of the Chets team (and a regular behind the bar during the piano summer school). Not as popular, nor as satisfying as Tchaikovsky’s first concerto, Leslie Howard nonetheless gave a masterful and enjoyable performance, at times pushing the orchestra to the limit with tempi. The Stockport Symphony Orchestra rose impressively to the challenge and one felt them begin to catch fire in this work.

In the second concerto concert of the evening, Dina Parakhina played Rachmaninov’s Rhapsody on a theme of Paganini with an exquisite sound, rhythmic vitality and musical imagination, matched by the orchestra who clearly enjoyed this piece.

This was followed by a highly imaginative rendering of Grieg’s Piano Concerto by Philip Fowke. The interaction between soloist, conductor and orchestra was clear throughout (and especially evident for those of us seated in the choir stalls with a view down to the pianist and conductor). Philip’s compelling and generous performance was rich in interesting voicings and a rare improvisatory quality, which brought renewed vigour and colour to this much-loved work. 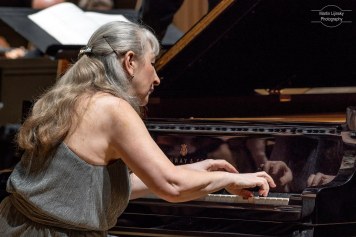