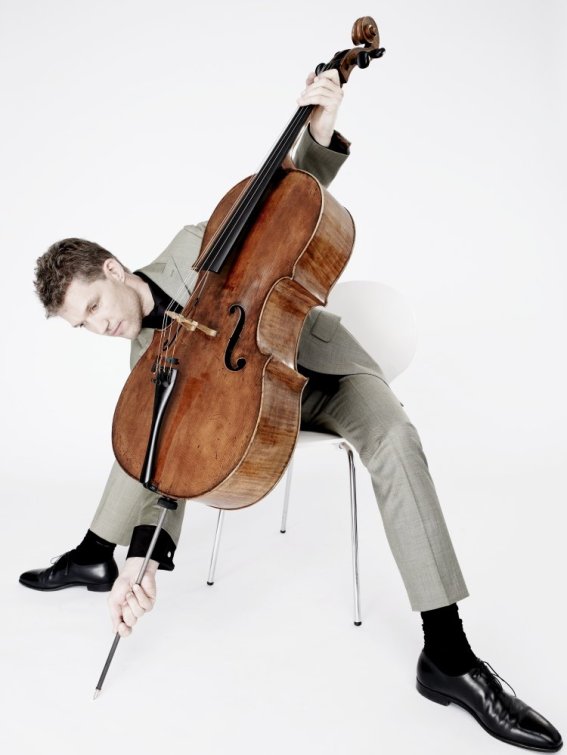 Who or what inspired you to take up the ‘cello and pursue a career in music?

Having had a brief and disastrous career on the piano aged five (6 lessons and the teacher sacked me for being ‘totally unmusical’), when I was seven I heard a cellist, loved the sound, and announced I would be a professional one day with my own helicopter. I’m still saving up.

I have been influenced by many things around me in my life – famous cellists of course (Yo-Yo Ma, Rostropovich, Casals etc), but also by Russians and their approach, by my wife, Viktoria Mullova and her uncompromisingly pure and selfless approach to music-making. But there are two influences that are not so obvious. I grew up on the Beatles and the aspect of their output I find most fascinating is that they did everything with love – at least until the last year or two – and this really shows in their music. George Harrison remarked that whenever any of them had an idea the response would always be ‘yes’ from the rest of the band, and that philosophy I aspire to – the positivity, inclusivity and humanity at the centre of the music. Also, I was profoundly influenced by watching the film The Thin Red Line. I was in a hotel room in Sydney and watched this brilliantly made war film and it completely destroyed me – I was a weeping wreck by the end, and the thing that exercised me most was, ‘what can I do to respond to this’? It just felt so impossible to do nothing, but what can a cellist do in the face of the inhumanity of our world? The only thing I could come up with was that I must practice and play with more heart, more dedication, and challenge myself every day to do better – in short to do my utmost every day to become the best I possibly can and help to add a happy and fulfilled grain of sand to the beach of the world. It is a lifelong task and one I take seriously, although I’m aware of how small one man’s contribution is, but that film was a deep inspiration.

I’m probably most proud of the last concerto performances before a short sabbatical I took this year. The cello concerto by HK Gruber is one of the hardest every written and I played it with the BBC Phil and Gruber conducting at Bridgewater Hall. I had such a good time playing. The orchestra were just awesome, Bridgewater Hall is very kind to cellos and I was very happy. Then a few weeks later I had 3 performances of Tavener’s The Protecting Veil in Mexico in beautiful halls where I felt totally free and comfortable onstage – Stephen Layton conducted like a dream so that I was absolutely liberated to make music without having to worry about anything. Heaven.

The Protecting Veil is a special one for me (see above), because I don’t approach it as a piece of classical music, but more from my experience of Indian classical music and improvisation – it was the music of India that inspired John Tavener as he was writing it. I enjoy playing it SO much!

Pretty random really – sometimes just because people ask me, and sometimes I decide what I want to play on a whim.

Mahler 9 with the Berlin Philharmonic and Abbado at the Proms in 1991. I would have laughed if you had told me that one day I would raise his wonderful son, Misha. Life is beautifully unpredictable.

So long as it is done with with true sincerity from the heart, you are on the right track.

Success is making the sound that comes out of the cello the same as the one in my head.

Anywhere with family and friends.

Being anywhere with family and friends.

My cello, of course.

What do you enjoy doing most? Breathing.

Sitting on a train, passing a beautiful river, ducks flying overhead in formation. All is good.

Matthew Barley is internationally known as cellist, improviser, arranger, music animateur, and Artistic Director of Between The Notes. His musical world is focused on projects that connect people in different ways, blurring the boundaries that never really existed between genres and people.

As a soloist and chamber musician he has performed in over 50 countries, including appearances with the BBC Scottish (Volkov) and Philharmonic (Hazlewood), the Melbourne Symphony (Tortelier), New Zealand Symphony (Tan Dun), Hong Kong Sinfonietta, Netherland Radio Symphony (Stenz), Czech Philharmonic, Vienna Radio Symphony, Kremerata Baltica, Royal Liverpool Philharmonic, Royal Scottish National (Alsop), and London Chamber Orchestra. He has performed at festivals in Lucerne, Schleswig-Holstein, Bonn-Beethovenfest, Hong Kong, Lanaudiere, Abu Dhabi, Krakow, City of London and in recent seasons has performed at some of the world’s great concert halls: London’s Wigmore Hall, Royal Albert Hall, Amsterdam’s Concertgebouw, Kumho Hall in Korea, Pablo Casals Hall in Tokyo, The Rudolfinium In Prague, and the Teatro Colon in Buenos Aires. A key aspect of his recitals is mixing repertoire in unusual ways, pairing Bach suites with jazz and improvisation. He is particularly interested in music with electronics, having commissioned works from many composers including Dai Fujikura, Peter Wiegold, DJ Bee, John Metcalfe and Jan Bang. He has given other premieres of pieces written for him by James MacMillan, Thomas Larcher, Detlev Glanert, John Woolrich, and Fraser Trainer.