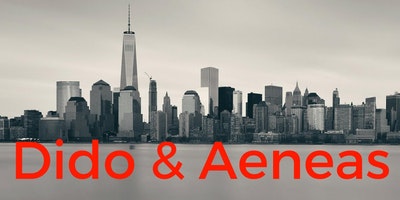 We are on the eve of our performance of Purcell’s baroque opera ‘Dido and Aeneas’. We’ve been in a dress rehearsal for hours and during a short break I close my eyes, wrap a thick woollen scarf about my neck, and play dead while other members of the choir stare at their mobile phones. Am I nervous? Yes! We all are. Up until now the chorus has had the benefit of numbers. On the night however, there will be no hiding – each and every one of us has been working on this challenging opera for months!

This project is the brainchild of Laura Lamph, our mezzo-soprano, who sang the title role of Dido touring with Sestina, the early music ensemble, in Ireland last year. She, together with our exacting Music Meister, Miles Lallemant, head up our three-year-old choir, Aves Cantantes. Songbirds! We are a mish-mash of twenty individuals of different ages and levels of singing experience. But no matter how different we may appear to the outside world, inside the church we sing as one.

When Father Richard Bastable, who is directing, put it to us nine months ago that we were not only going to sing the opera but to stage it in 1980s drug-fuelled New York, I was astonished. I am not averse to challenges, however I had doubts about the project.

One particular choir practice comes to mind. It was raining heavily one September night and there was a thin turn-out of sopranos. Altos were missing their tricky entries in ‘Thanks to these lonesome vales’. Our smooth-voiced tenor went spectacularly wrong singing Belinda’s part not once but three times! Frustrated, he got up, went to the back of the church to pour himself a beaker of pinot noir. He was no doubt getting himself in character for the song ‘Come Away Fellow Sailors’ which follows. As the drunken sailor in Act three, he leads brilliantly.

The basses – well, the basses just looked a bit bemused that evening. And if that wasn’t enough, our Music Meister despairing with our enunciation and phrasing, also had a leaky church roof to contend with. Raindrops plopped into buckets around the piano, which had almost lost a leg. It was being held together with packing tape!

And then into the church bounced fresh-faced Ashley Stafford our musical director ‘number two’. We have already benefited from his singing training in previous concerts. Now his breathing, yoga-inspired exercises and infectious enthusiasm for the score did much to open up our voices and raise our spirits. With sweeping arms he carried us to the next level, allowing Miles, Music Meister one, to concentrate on the details of the score.

Just a few days ago our morale was boosted by the influx of young professionals. These are mostly post grad music students to join us older songbirds. Tall, broad-shouldered Aeneas, Edward Kay, is the perfect romantic lead with a powerful, sensitive, high baritone. His voice melds beautifully with Laura’s controlled, strong, sweet, sad mezzo-soprano. I defy anyone not to shed a tear during a rendering of a drug-induced ‘When I am laid’.

In this transposition of the classical tale of ‘Dido and Aeneas’, her enemy number one is her own self-inflicted drink and drug addiction. Our adaptation however has retained the witches, who in true Shakespeare fashion, wreak havoc and cast spells on Aeneas. Our own red-haired Bonnie O’Callaghan is excellent in her witch-like malevolence, and so is witch number two, Heidi Jost. The Sorceress played by counter-tenor, Alexander Pullinger, is equally arresting and impressive. All the soloists are strong and it is their star presence and vocal brilliance which raises our game.

So here we are with just one day to go. The strings are tuning up around Miles’s harpsichord. Father Richard, director, takes one last look at the New York skyline on stage and then hastily reviews his notes. The pressure is on, for him and for all the performers. We have only had two rehearsals in the magnificent gothic-style, Church of the Holy Innocents near Ravenscourt Park.

I adjust my shoulder pads just wondering whether we can pull it off. Can our amateur/professional collaboration make the impact we hope it will? Yes! I believe we’ve conjured something out of thin air and the gods are smiling on us tonight…

Who or what inspired you to take up singing and pursue a career in music?

I think it must have been my competitive streak. An opportunity arose in school and I thought, I can do that (despite having never sung before) and so began my love of singing and music.

My music teacher in school, Ruth McCartney was definitely very important. As well as inspiring me to become a singer, she also taught me the importance of professionalism (I was a little bit wild back then.)

Moving to London from Northern Ireland was certainly a challenge but it was also the best thing that I could have done for my career. I sing a lot of choral music and there really is no better place to start than London. Because I was a bit of a random Irish person I was not in the inner circle (everyone knows each other) but I managed to audition and get work and have had the opportunity to work with and meet some amazing people.

I also work abroad quite a lot which means spending a lot of time living out of a suitcase, packing has been a real challenge.

It is hard to say. When I was about 16 I sang as a soloist with my school choir on Last Night of the Proms (live from Belfast) It was viewed by millions of people but when I look back on it I was so calm and cool and just relishing every moment, I am not sure I will ever feel that again. I suppose it is the joy of youth.

More recently, I played the role of Dido last year for Sestina, the early music ensemble. I made it onto BBC Radio 3’s “ In Tune” programme to sing the Lament. This was quite scary given how many world class recordings there are of this particular piece and how many musicians listen to radio 3 but I reckon I did myself proud.

Which particular works do you think you sing best?

I am a huge fan of Bach, although I am not sure it is what I sing best yet.

I sing English song quite well, a fact that amuses some of my colleagues because of my broad Belfast accent when I talk.

I also do a pretty good Irish folk song.

As a singer, what is your definition of success?

Being able to live is definitely a realistic measure of a success and I have managed so far, although there have been a few scary moments over the years. However, I think the real success is having a job that you love and find fulfilling. It is not always glamorous but it is usually fun and when you sing amazing music with excellent musicians it makes it all worthwhile.

I really enjoy going on holiday funnily enough. I obviously like working but I love having a well-deserved break when I can actually switch off. I have realised how much the whole having a phone and internet really mean that we are rarely switched off from work!

I think my housemate would say stressed but I think mostly determined. I am excited about lots of things including my singing the part of Dido again for the Brook Green Festival. This time however we have transposed the baroque opera of ‘Dido and Aeneas’ to 80s Manhattan! As the festival organiser too I am anxious for it to be a success. I definitely think organising something and performing in it is quite a lot to take on!
And now meet baritone Edward Kay

Who or what inspired you to take up singing and pursue a career in music?

I started singing as a boy at the age of seven at Clifton Lodge School in Ealing which had a very impressive choir setup at the time. I remember one day coming back home from school and announcing to my parents that I wanted to audition – nothing much more to it than that!


Who or what have been the most important influences on your musical life and career?

Tenor Ben Johnson with whom I recently started studying.

Changing technique in a rather drastic way in December 2016. It involved pulling out of a large amount of work and much soul-searching.

Which performance are you most proud of?

I performed ‘Abschied’ from Schubert’s Schwangengesang a week or so ago with not much notice. It is particularly tricky as you have so many words to learn….!

Which particular works do you think you sing best?

I am focussing mainly on Italian songs and arias at the moment while I concentrate on learning how to sing. Tosti writes beautiful melodies and, in my opinion, you can’t beat the antique arias like ‘Caro mio ben’ or ‘Per la gloria d’adorarvi’.

As a singer, what is your definition of success?

Being able to convey the emotions, themes and messages that composers create with their music in the most convincing manner and truly understanding how to sing.

What do you consider to be the most important ideas and concepts to impart to aspiring singers?

As an aspiring singer myself I feel uncomfortable ‘imparting’ too much but I would say that you need to have a technique that will last your entire life; you need to listen to your instincts; you need to have a core support network around you and, above all, don’t compare your own journey to anyone else’s

Performing around the world singing a mixture of repertoire in various opera houses and concert venues and working with interesting, passionate and inspiring people. And still have time to watch the Formula 1 and the Sunday newspaper on the weekend.

Positive and excited about the future. Concentrating on practising and have a number of concerts coming up to look forward to. Having the chance to perform a staged work like Dido and Aeneas throws up all sorts of difficulties and with the rather limited rehearsal schedule it presents new hurdles to overcome but it is an opportunity I am relishing and am very much looking forward to the performance.

As an oratorio soloist, Laura has worked with various directors including Judy Martin and David Hill; she is a featured soloist on discs directed by Eamonn Dougan, Nigel McClintock and Paul Hillier, and has appeared as a soloist on Last Night of the Proms and BBC Radio Ulster Sounds Classical.

Edward Kay sings Aeneas in ‘Dido and Aeneas’ opening the Brook Green Music Festival. He is currently studying with the tenor Ben Johnson having recently finished the Vocal Studies MA at the Royal Academy of Music.

Future performances include Bach’s Christmas Oratorio with Reading Festival Chorus, Beethoven’s Mass in C in Barnet and Handel’s Messiah with Worcester College Oxford. This August Edward was a Young Artist at the Southrepps Classical Music Festival.