Guest review by Patrick, a musicologist residing in the Midwest 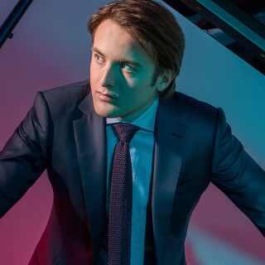 Daniil Trifonov was annoyed. He walked out on stage with a pained expression, the cheery look of his youth victim of the trials, presumably, of a professional career. After two cursorily rude bows to the audience (which wrapped around the stage entirely), he jumped straight onto the bench, staring – grimacing – at the keys. Kinderszenen contained all of his trademark complexity of line and texture brought about by Trifonov’s utterly unique use of microdislocations – employed continuously throughout the whole set. This technique is the heart of his genius, allowing him to achieve extreme contrasts in texture, voicing, and phrasing of line. Can you think of any other pianist that developed the dislocation to such a degree? While it may seem like a product of his Russian education, is there another Russian pianist today that pursues the same innovation in performance technique? I doubt Trifonov learned in America either – I was certainly never allowed by my teacher to engage in such excesses. Neither can it be said that he is reviving some past performance practice – older Soviet pianists certainly employed dislocation to add emphasis to moments of arrival, but not in the pervasive manner employed here. Furthermore, the traditional type of dislocation – pressing the bass notes before the treble to create a sense of arrival – is decidedly not what one typically hears at a Trifonov concert. He must be taking a lesson from chamber music and vocal accompanying practice. After all, it is somewhat common among good accompanists to delay the bass arrivals until after the attack of the vocal notes fades into resonance. And this type of dislocation, with the bass (and also middle voices) delayed until after the treble, is what makes Trifonov’s artistry so special.

Back to the program: Kinderszenen was a feast to the ears of line and color. Dramatic passages were dispatched with great energy and aplomb. It must be said, however, that Trifonov’s typical lyricism seemed to be dulled this evening – perhaps a result of whatever annoyance was bothering him. The slower passages did not quite have that feeling of magical cessation of time, often miraculously whipped up by the pianist through an ingenious combination of tempo manipulation and textural contrasts. While these techniques were still very much present, there was the deadly feeling of impatience imposed over them. Notwithstanding, I cannot register a complaint, as what may have been lacking in the slower passages were more than made up for by the fire and drama brought to the climactic passages, especially as the recital progressed. The next piece, Schumann’s Toccata, testifies to Trifonov’s brilliance in program construction – after the lapidary miniatures of Kinderszenen, the audience was ready to be whipped into a frenzy, and the ploy worked – numerous people gave a standing ovation to the second piece on the program. The sound world of the Toccata (and of the Schumann in general) is very interesting. It seems to me that Trifonov has entered into a new phase of his career where he is exploring the mid-range of the piano. The Toccata was a great illustration of this, as the soprano and bass voices were hardly ever brought out in favor of a gritty voicing of the middle voice chords filling out the texture (another thing I would never have been allowed to do). This technique robs the Toccata of its flair as a dramatic showpiece with a thundering bass, but gives it a new lease on life by revealing its wacky side (I cannot help but now see a connection to Stravinsky’s Petrushka, occupying the place of finale in the other half of the program). As for the Kreisleriana, the masterwork of the first half, I can firmly declare that Trifonov is peerless in this work. No one other recording or performance that I have ever heard contains even half of his kaleidoscopic conception and range of texture, timbre, and tempo: my companion at the concert (a violinist herself) said that at several points she forgot that she was listening to the piano (an instrument she never took to that much) and instead thought there was a chamber ensemble on stage! Can you think of higher praise for a pianist than that?

After a massive standing ovation for the first half and the pause, Trifonov sprints back out the bench and dives into his selections from Shostakovich’s Preludes and Fugues. These selections were not chosen in their original order, but arranged for maximum effect – the creepily gorgeous opening prelude leads us through a luscious set of figural fragrances and fabrics before ending with a fugue containing a stormy finish. After this piece, the audience not only stood up to clap, but starting to yell bravos as well – something I have never heard before in the middle of a program – obscuring even the start of the Stravinsky! Even more so than the Schumann works, Shostakovich provided a canvas for Trifonov’s deeply original creativity – the range of sounds coming from the piano was tremendous, but equally matched by a phenomenal sense of dramatic pacing and climactic energy. The metaphor of Trifonov as a chamber ensemble with independent-minded players never seemed more apt. The final work on the program – Stravinsky’s Petrushka and the highlight of the concert – must be heard to be believed. No longer can Petrushka be considered an empty virtuoso vehicle, indeed so much life was added to it that many parts simply did not resemble what we are used to hearing. On top of all the qualities emphasized above (including some marvelously voiced chords and textures), it was Trifonov’s undeniable genius at rhythmic shaping that brought the piece to life. In short, the rhythms were so powerful, the syncopations so strong, the polyrhythms so present, that one could hardly avoid falling out of your seat – indeed Trifonov seemed perilously close falling off the bench has he was what could only be called dancing on the bench. And the music was dancing too, in every nook and cranny of the piece Stravinsky’s vision of the Russian countryside came to life. For the first time, that old wild smile began to appear on Trifonov’s face.

After tremendous applause that began before the piece even finished, the audience was treated to two encores (desperate attempts to garner a third through yelling at the pianist proved unsuccessful). The first was Nikolay Medtner’s Op. 38/8 “Alla Reminiscenza” played at a breakneck speed, building up to a tremendous flourish. Let it be known that I would graciously donate an arm and a leg to hear Trifonov perform the whole set. The second encore was a delightful piece by Prokofiev bringing the nearly 3-hour concert to a close. The concert showed once again that Trifonov is the premier recitalist of the age – it was only marred by a phone endlessly ringing during the Kreisleriana, which, after being supposedly shut off, went on to ring again exactly 30 seconds later.

Shostakovich – Selections from 24 Preludes and Fugues