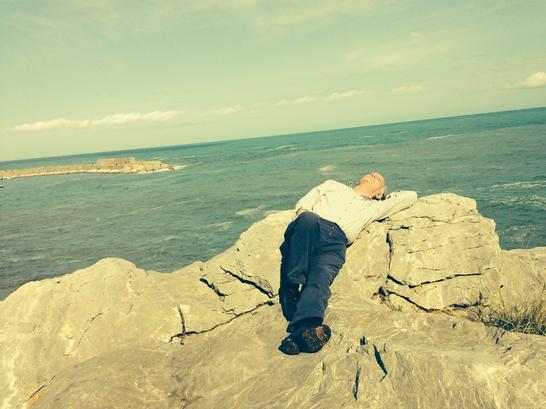 Myself. But then Bernard Rands my tutor and Bill Colleran at Universal Edition (London/Vienna).

What have been the greatest challenges/frustrations of your career so far?

They were the 4 major works written for the BBC Symphony Orchestra. I have at least 4 new works still waiting on first performances. But I remain patient.

Time. I work slowly and with painstaking care. My music is sometimes complex and it is crucial that performers receive as near perfect copy of performance materials as is possible. I do my best and I have a fine copyist. UE taught me this, way back in 1972.

The pleasures are being there for rehearsals. Some conductors are exceptional (Sir Andrew Davis), some work seriously hard (Martyn Brabbins), others you may never wish to see again. New Music Ensembles, string quartets and solo performers have been the most satisfying to work with. Lifelong friendships are made.

Of which works are you most proud?

“WULF” for 24 voices (amplified) and 24 instrumentalists – yet to receive a first performance; “The Attraction of Opposites” for 2 pianos; the orchestral trilogy, “Vixen”, “Qibti” and Phoenix”; “Hey Presto!” written for BCMG conducted by Diego Masson, happiest of all.

How would you characterise your compositional language?

Proudly European but, like Bartok, drawing on cultures further afield and from the distant past.

How do you work?

In my music barn, composing, still, on manuscript paper. However, most work has been carried out in Sicily. The climate, the food and wines kept me going, and going well, so producing the goods. I also found plenty of time to read, to feed my imagination.

Experiences: Simon Rattle conducting all Mahler and some Messiaen with the CBSO, Symphony Hall, Birmingham.

Feed your imagination and let it run. I always ask myself the question “What if?” Be your own best critic and bin a lot.

Where I am now.

Being with the right person and being amongst friends.

It is my 40-year-old Pavoni, brass and copper, coffee machine.

Born in Yorkshire in 1945, Vic Hoyland’s earliest interests were in painting, calligraphy and architecture, but after completing an Arts degree at Hull University and a prize winning work was submitted to the BBC, he decided to concentrate on music. Wilfrid Mellers invited Vic to undertake a doctorate at the then new music department at York University where his tutors were Robert Sherlaw Johnson and Bernard Rands. From 1980-1984 he was Haywood Fellow at the Barber Institute, then after two years at York University he returned to Birmingham as a full-time lecturer responsible for MDD, an interdisciplinary programme between music, drama and dance. He was subsequently Professor in Composition at Birmingham until his retirement in 2011. In 2015 he was made Emeritus Professor, in recognition of his longstanding and valued contribution to the University of Birmingham.

Commissions have come from many festivals – Aldeburgh, Almeida, Bath, Cheltenham, Warwick and Stratford, Huddersfield, South Bank and York – from organisations such as the BBC Symphony Orchestra and ensembles such as Lontano, the Arditti Quartet, Lindsay Quartet, BCMG, Endymion and Vocem. Works prior to 1994 are held by Universal Edition (Vienna). Works after 1994 are held by Composers Edition. Works include In transit for large orchestra which, together with Vixen, was recorded by the BBC Symphony Orchestra for NMC records. Most of Vic’s music has been broadcast on BBC Radio 3. The Other Side of the Air and Token are also available on NMC records. The second work in his orchestral triptych, Qibti was premiered at the Barbican on 18 December 2003 and conducted superbly by Sir Andrew Davis.

Reflections on the water in a still Portland marina #sea #seaside #reflections
Draught Guinness. At the pub! With @__max__wilson__
Amateur pianists - how has lockdown been for you?
“The thing of the world that I love most” – Samuel Pepys and ‘Musique’
Splendid new book from my talented friend @jackycollissharvey #Pepys #London #walking
Who are these exceptional amateurs and how have they achieved a standard of playing which, if presented in a blind audition, would be indistinguishable from a professional pianist?