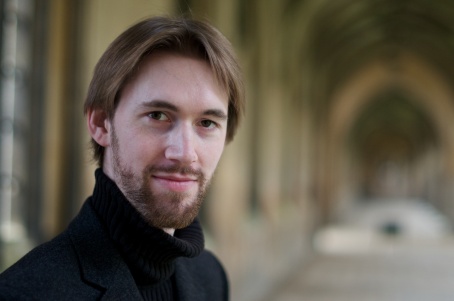 Who or what inspired you to take up composing, and make it your career?

Like a great many other composers, the initial impetus or inspiration to write came from a deep-seated desire to emulate (and often imitate!) the music I had encountered in childhood and adolescence, through performing and learning music – in my case, through brass bands, orchestras and youth opera (I was blessed by the fact that Leeds County Council has an amazing music service with many inspirational teachers). Over time, I discovered the great power of music to express ideas about the world and about oneself, and this awoke in me the desire to make composition my vocation.

Who or what have been the most important influences on your composing and your musical career to date?

My initial passions were fired by the English pastoral school, perhaps best represented by Vaughan-Williams and Holst. After this, I went through a Steve Reich phase (pun intended!), which had a very substantial impact upon my development, since it led me to realise that tonality could still be used in original and meaningful ways. Subsequently, I underwent a somewhat obsessive infatuation with Wagner, whose protean use of a wide variety of musical influences to create dramatic works of enormous philosophical depth planted in me the ambition to write opera. At this point, I re-discovered Benjamin Britten, who I came to see as a composer who had achieved equal dramatic mastery and psychological understanding, but in a more English and down-to-earth manner.

Undoubtedly my first two operas. Through these, I have learnt how to synthesise all my musical influences and gradually, from naïve beginnings, to write music and libretti which not only work poetically and musically but which also function well dramatically on the stage. Organising the performances and staging productions was just as much a challenge as the actual composition. For my first opera, The Nightingale and the Rose (after Oscar Wilde), written while I was still an undergraduate, I combined an orchestra of RCM students with the hundred-strong Yorkshire Philharmonic Choir and professional opera singers. My children’s opera, The Owl who was Afraid of the Dark (after Jill Tomlinson), then involved co-ordinating sixty primary-school children from around Cambridgeshire with professional musicians, as well as singers from Cambridge University, which was an even more formidable logistical challenge, since it meant one had to deal not only with some fairly mischievous young spirits, but also with their anxious parents!

What are the particular pleasures/challenges of working with individual artists, ensembles or orchestras?

I always enjoy working with musicians and artists to bring a project into being. I would consider myself the entrepreneurial type, and tend to gather together a team of creative people to build a project around a dramatic conception. Collaboration involves a balance between allowing plenty of creative freedom to the individuals that you are working with, whilst striving to direct everybody’s energies towards a mutual goal. Maintaining this balance without creating too many frictions and tensions is always a challenge; the trick is to find people who share your ideals.

Please tell us more about your  opera Pincher Martin.

Pincher Martin is an operatic adaptation of William Golding’s novel and poetic masterpiece. Recreating on the stage the existential plight of a marooned naval officer who struggles to survive first in the ocean, then on a lonely rocky islet in the middle of the Atlantic, has stretched my imagination to the limit, and has required the use of devices and technology which were previously unfamiliar to me. Throughout the course of the drama, we will be using a silver-screen movie-style cinematic backdrop, both to aid us in realising difficult scenarios such as a man drowning in the Atlantic, and to evoke the drama’s World War II setting.

Just one example of how this will work in practice is a scene in a moving motorcar, where the protagonist terrifies a woman with his dangerous and aggressive driving in a terrible attempt to make her acquiesce to his desires (yes, this is in the book…!). Musically, I have accompanied this scene with continuous unpitched and then pitched fluttertongues in four solo brass instruments, to evoke the sound of a car engine, first stationary and then in faster and faster motion. In terms of staging, this coordinates with the film, in that what is displayed on the screen is the view seen from the back seat of a car, first shaking very slightly as the car is parked in a layby with its engine idling, and then changing as the car moves off down the road. This is combined on-stage with the set, which in this case consists of a car bonnet behind which the protagonists will sit, with the backseat view behind them on the film. The bonnet itself is half-car, half-rock-like in substance, so that we can move expeditiously from a scene taking place on the rocky islet to this memory scene in the car, whilst also suggesting to the audience that the rock is actually an imaginary environment created by Pincher’s subconscious, and that we are dealing with scenes from his past life, which he is recalling during his purgatorial existence on the island.

Using this synthesis of music, film and staging to bring William Golding’s story to life has been an incredibly difficult challenge, but one which I am very glad to be undertaking, as it has expanded my creative world substantially.

What do you consider to be the most important ideas and concepts to impart to aspiring musicians/composers?

To be yourself whilst learning from others.

Oliver Rudland is an English composer based in Cambridge, UK, known for his accessible style of modern composition. His operas have received particular attention and critical acclaim.

His latest opera, ‘Pincher Martin’, based on the novel by William Golding, was staged at the RCM Britten Theatre in July 2014: ‘This is an eloquent, succinct opera… In music and design…, Pincher Martin pinched and gripped. This opera deserves to live.’ (The Times: ★★★★)

‘Rudland appears to have achieved that rare and valuable object: a contemporary work that is both challenging yet accessible. Despite its disturbing subject matter, Pincher Martin is lyrical, inventive, and above all a thoroughly engaging work.’ (Bachtrack: ★★★★)

His first opera, ‘The Nightingale and the Rose’, after the story by Oscar Wilde, was staged at the Carriageworks Theatre for four nights in 2008 by Leeds Youth Opera. ‘Exceptional talent…Oliver is going to be a big name in the future.’ (Yorkshire Evening Post)

In 2011, his children’s opera, ‘The Owl who was Afraid of the Dark’, based on the classic story by Jill Tomlinson, was staged at the Cambridge University Church, and received very positive reviews from critics and the local community alike: ‘This was children’s opera at its best; it was fun and accessible to people of all ages and backgrounds.’ (GSM News)

‘Benjamin Britten, his Noah, and bad-tempered God must almost regret that a couple of owls made their way into the ark to reproduce themselves towards so effective a rival opera.’ (Music and Vision)

His chamber works have been performed at the Cheltenham International Music Festival, the Southbank Centre, and the DiMenna Center (NYC), as well as at other venues worldwide. His trombone sonata, ‘The Conquests of Zeus’, commissioned by Matthew Gee, principal trombonist of the London Philharmonic Orchestra, has been performed widely across Europe.

Oliver is currently Composer-in-Residence with the London Choral Sinfonia. He is also working towards a new large-scale, two-act opera due for completion in 2020.