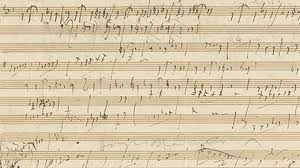 Friday morning, and I was enjoying fairly leisurely tea and toast in bed (not having to get up early, for a change, to chivvy my son off to school) when I switched on Radio 3 and caught the charming Scherzo of Beethoven’s Opus 97 Piano Trio, the ‘Archduke’.

This work was one of the set pieces for my music A-Level (circa 1984), and has remained a favourite ever since. Pubished in 1811, it is Beethoven’s last piano trio. It comes from the same period of the composer’s creative life as the Opus 96 Sonata for violin and piano, and shares some of the same qualities of this work in its elegant long-spun melodies and nobility of expression. I was fortunate in my music A-Level group in that the other students were a violinist and cellist respectively – and we were all of a similar standard, having all done our Grade 8 exams at roughly the same time. The A-Level syllabus required us to analyse the complete work, and as well as studying it in the classroom, we spent a great deal of time playing it together, which was both enjoyable and educational, since it reinforced many of the things we had been discussing in class.

The opening movement is in B-flat major, the same key as the first movement of Schubert’s great valedictory D960 sonata. The two works share some characteristics aside from the key, which is both serene and grandiose, poignant and wistful: both begin with a stately and graceful, long-lined opening theme, establishing the nobility which permeates the entire work. The Archduke is full of sweetness and spaciousness, monumentality and intimacy. Its emotional core is the third movement, an ethereal set of variations on a hymn-like theme, and one of Beethoven’s most profoundly moving accomplishments. Player and listener are reminded of similar movements in the late piano sonatas (especially Opp.109 and 111), the Ninth Symphony, or the “Heiliger Dankgesang” of the Op. 132 string quartet.

Of course, I didn’t know these things when I was studying the work in my teens. We tended to do the analysis, without regard to the historical or compositional context of a work, studying it in isolation, blanking out all the other music that Beethoven was writing at the same time. But the work must have touched me, because whenever I hear it now, I experience a great rush of memory which can transport me right back to the music studio at school in the mid-1980s.

My school was blessed with an extremely fine music department, headed by a very energetic and hands-on music master. I was an active member of the department from the day I joined the school, and belonged to the senior orchestra (playing first desk clarinet), chamber orchestra (playing harpsichord continuo), choir, wind and recorder ensembles, and the madrigal group. I was a rather argumentative, opinionated and competitive A-Level student, always picking a fight with my music teacher (memorably, over my use of the word “bucolic” to describe Beethoven’s Pastoral Symphony), and behaving in a (totally unjustified) diva-ish way about my piano playing. I thought I was the brightest student in the A-Level group, and I still cringe at the memory of my pretentious, know-it-all behaviour. I’m not sure what the other students thought of me, but when we were playing the Archduke Trio together, we were all equal before the music – which is how it should be. The violinist used to stand by the piano in her imperious violinist’s stance, tuning her instrument with much huffing and hair-tossing, while the ‘cellist, a clumsy, rather nervy girl who could be guaranteed to knock over all the other music stands when taking her place in the orchestra, struggled to secure the spike of her ‘cello. Then the music would begin, the quietly beautiful opening melody in the piano, and we would forget ourselves for awhile, enjoying the music and that particular give-and-take that comes from ensemble playing. Playing with other musicians can be so satisfying – far more enjoyable that hours of grinding practise alone, with no one to chat and joke with. It’s like belonging to a very special family with its own vicissitudes, petty niggles, tears and triumphs, and, like a proper family member, one has a responsibility towards the others, to be generous and open-hearted, and to keep going, no matter what, transcending oneself. It forces one to be modest, before the music and the other members of the ensemble.

We never performed the Archduke at school, though all three of us worked together on other works, including the marvellous Bach ‘Double’ Concerto (I was on harpsichord) with the chamber orchestra. I still have the manuscript of the Trio somewhere, covered in my analytical notes, a souvenir of some very happy and memorable years of music-making.