The comment below appeared on a local network site in response to a concert which I’m promoting. Sadly, I have to say I was not surprised to read it. There is a prevailing attitude that musicians, especially young or emerging musicians,  don’t need to be paid because they should simply be grateful for the “exposure”. In addition a lot of people also feel musicians don’t need payment because they love what they do, or they regard what musicians do as a “hobby” or “not a proper job”.

Now I expect there are dentists out there who love what they do, or plumbers…..by the same token should they also not be paid?

No, of course not. Because these people are professionals who have undergone rigorous training and who need to make a living to pay the bills and support their families.

Musicians are no different. Contrary to what some ignorant folk may think, musicians are real people with bills to pay, families to support….etc.

Consider for a moment what a concert fee (and we’re not talking a four- or five-figure fee here) covers: not just the time spent performing (c90-120 minutes for a solo concert) but all the preparation (learning and finessing the music – often many days and weeks, depending on the repertoire). In addition, the musician may have to pay travel expenses, the cost of a night or more in a hotel, food and living…. After all those costs are covered, it’s unlikely the musician will have actually “made” any money at all from the concert.

Most musicians are freelance, and I know many who live almost hand to mouth, supplementing fairly meagre concert fees by teaching or through other music-related work, or work outside the sphere of music in order to pay the bills.

Internationally-renowned musicians like Martha Argerich or Daniel Trifonov may command large concert fees, but the majority of musicians do not. All work very hard to bring to life the wonderful music which we are privileged to share with them in concert.

Don’t ever tell a musician they don’t need a fee because they’re “getting good exposure” or because they love what they do. The notion that musicians should be expected to perform for nothing is demeaning and insulting, and devalues the huge amount of highly concentrated work/effort musicians put in to prepare for a performance. 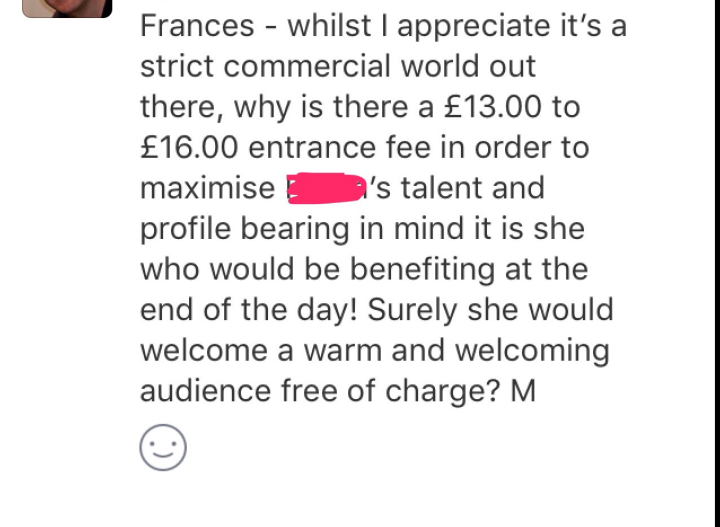