Released to coincide with his 60th birthday, American pianist and composer Lowell Liebermann’s new double album Personal Demons features three of his own compositions which have special significance for him alongside music by other composers which has haunted, inspired and shaped his musical career and compositional output. It’s an interesting mix of moods, from the demonic Presto opening movement of Liebermann’s suite Gargoyles (his most performed work) to the fragile lyricism of Kabeláč’s Preludes (a composer whose music I had not encountered before), the dark majesty of Liszt’s Totentanz and Busoni’s herculean Fantasia Contrappuntistica, Liebermann’s unsettled and haunting Apparitions complemented by the expressive peculiarities and unexpected harmonies of Schubert’s Hüttenbrenner, and finally Liebermann’s Nocturne No. 10, Op. 99, written in memory of the composer Gian Carlo Menotti, which provides a moving and intimate, if not entirely settled, close to the album.

Liebermann’s playing is vivid, expressive and, when required, fleet and ferocious. This is exactly the kind of selection I’d happily hear in concert, and the opportunity to experience not only a composer playing his own music, but also the music which is particularly special to him offers some fascinating insights into Liebermann’s musical influences. This is also music which demands concentrated listening, but it’s well worth the effort. 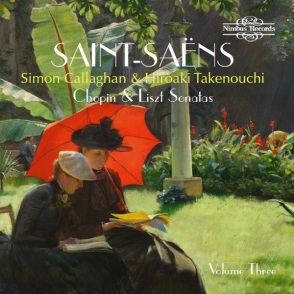 This new release from Nimbus explores Saint-Saens as arranger in his own versions of piano sonatas by Chopin and Liszt.

I was expecting thicker, fuller textures, given that two pianos instead of one are employed here, but there is surprising lightness and delicacy in the passages where both pianos are playing, and wherever either piano is playing alone, it is playing the original text. Saint-Saens exercises surprising restraint in not adding too much of his own musical personality to these sonatas; instead, in Chopin’s “Marche Funebre” sonata, we are invited to fully appreciate the exquisite clarity and variety of Chopin’s writing. In the middle, lyrical section of the second movement, we have the sense of a proper duet between two separate instruments as Saint-Saens’ arrangement highlights Chopin’s elegant organisation of voices. In the funeral march, the bass line is a dark, dead bell, tolling solemnly beneath the famous melody before the second subject opens out into more majestic territory. The contrasting middle section is tender and lyrical, sensitively phrased with sinuous rubato.

Liszt considered making a two-piano transcription of his B-minor sonata and he would have doubtless approved of Saint-Saens’ arrangement which remains so faithful to the original but with the opportunity for expressive emphasis in the passages where both instruments are playing. As in the Chopin sonata, Saint-Saens’ deftly highlights duetting passages, allowing the listener to appreciate inner lines and details which may not always be obvious in the original version.

I have to confess that I never really taken to Liszt’s B-minor sonata, but Callaghan and Takenouchi make a persuasive case for this music in their performance and there are moments of high drama contrasting with great beauty and lyricism. The Andante Sostenuto middle movement is particularly arresting.