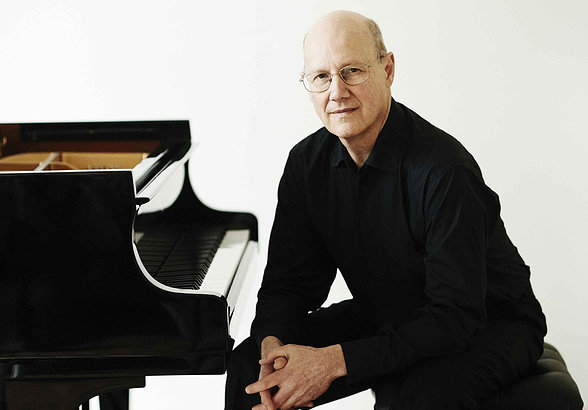 Who or what inspired you to take up piano and pursue a career in music?

I remember being drawn to the piano as a very young child. I had a French aunt who was a superb pianist. When she came to visit and sat to play at the old Bechstein grand that we had at home, a kind of magic descended on the household. I naturally enjoyed starting lessons at the age of seven. It was only quite late in my life that my mother confessed to me that she had listened to gramophone records incessantly while she was pregnant with me, with the express intention of producing a musical child (my older brothers had not shown great interest in music…). I was a bit taken aback to think that I had been brainwashed in the womb, but, on reflection, I am quite grateful!

I could make a long list of people who have been important in shaping my musical life, amongst whom would be many composers and colleagues, not least my fellow players in the Schubert Ensemble (which has remained unchanged for 22 years). But three teachers stand out above all others. My greatest debt of gratitude goes to Rosemary Hammond, a local schoolteacher and choir director, who took me under her wing when I was eleven years old and floundering at an unmusical boarding school. She was no great performer, but had an infectious love of music and was an inspirational teacher. She introduced me to playing on clavichord and fortepiano as well as modern piano, taught me to compose and encouraged me with astonishing warmth and generosity. In my twenties I was lucky enough to study with Vlado Perlemuter, whose honest and unmannered musicality is still an inspiration to me, and also with Peter Feuchtwanger, a maverick and unorthodox teacher who taught me to open my eyes and ears in unexpected ways and gave me the courage to shape my career by following my enthusiasms.

It may sound simplistic to say this, but the biggest challenges of my career have been developing that career in the first place and then sustaining it. I can honestly say that I have loved my professional life, but for years it involved a huge amount of hard work and uncertainty about the future, together with the constant battle of trying to juggle travelling and working at unsociable hours with bringing up a family. These pressures are common to many freelance professions, but we pianists inhabit a world overcrowded with dazzling talent and I can’t think of a single moment over the years when I have felt I could take my career for granted. The musical challenges (of which there have been many!) have felt easy by comparison.

Without any hesitation, I would hold up my recording of Pavel Zemek Novák’s 24 Preludes and Fugues, which came out on Champs Hill Records in 2011. It is a monumental work lasting around 75 minutes, which was written for me over a 17-year period from 1989 to 2006. I found the pieces incredibly difficult to play (and to read – they were written in manuscript and almost every page was covered in dozens of corrections!) and the recording took a huge amount of preparation. It was a labour of love, but massively rewarding. The Preludes and Fugues comprise some of the most important and original piano music that I have ever played. Pavel is not hugely well known outside the Czech Republic, but I am convinced that his music will become better and better known. Of the 45 or so CD recordings that I have made over the years, I think this is the one most likely to outlive me.

I am probably the last person who should try to judge what I play best, but I feel especially at home playing Schubert, Chopin, Fauré and Janáček, and if I had to single out one work of each composer, they would be the Wanderer: Fantasie, the First Ballade, the Sixth Nocturne and In the Mists.

I like to introduce new works into my repertoire each season and to return to works I have not played for a while. Recording plans and new commissions also affect the make-up of programmes, and large-scale projects too at times. At the moment my programmes are built around love songs for solo piano, both romantic pieces and a large collection of newly commissioned works.

I tend to judge venues as much by the pianos they offer as well as their acoustic. The Wigmore Hall ticks all boxes for me. While I love performing in its acoustic, it also has one of the best-maintained Steinways in the country. Next year will be the fortieth anniversary of my first concert there, so I can add familiarity and decades of happy memories to its attractions! Competing with the Wigmore is the medieval Great Hall at Dartington, which is a beautiful space to perform in, and is also full of memories for me. I heard many of the most memorable concerts of my life there as a student at the Summer School in the late 60s and 70s and it always gives me a huge thrill to be playing there myself.

I have too many favourite musicians in the present who I could list – composers, instrumentalists and fellow pianists who are friends and many others who I admire from afar – so I will stick to those from the past who I heard play live and whose recordings I still love to listen to Artur Rubinstein, Vlado Perlemuter, Shura Cherkassy, and Rudolf Serkin.

Nearly 20 years ago the Schubert Ensemble launched a project called Chamber Music 2000, in which we commissioned several dozen new chamber works for young pianists and string players. We put on over twenty public concerts in venues all over the UK, including the Wigmore Hall and South Bank Centre, in which young musicians, mainly teenagers, performed whole concerts of works by living composers. These concerts had a wonderful spirit of engagement and adventure and were some of the most memorable I have attended as a listener.

It is the privilege of older musicians to specialise (if they want to!), but I think for younger and aspiring musicians a broad experience of music is essential. It is important to hear lots of live performances and to study as wide a repertoire as possible, and, very particularly, repertoire beyond that written for your own instrument. And I firmly believe that working with living composers can teach us an enormous amount about how to approach interpreting music from the past.

I feel very positive about life at the moment! I am enjoying playing the piano more than ever right now and I have a number of projects on the go that I am finding fascinating and challenging.

William Howard is established as one of Britain’s leading pianists, enjoying a career that has taken him to over 40 different countries. His performing life consists of solo recitals, concerto performances, guest appearances with chamber ensembles and instrumentalists, and regular touring with the Schubert Ensemble of London, Britain’s leading group for piano and strings and winners of the Royal Philharmonic Society Award for Best Chamber Ensemble. He can be heard on around 40 CDs, released by Chandos, Hyperion, ASV, NMC, Collins Classics, Black Box, Champs Hill, Nimbus and Orchid Classics.

His solo career has taken him to many of Britain’s most important festivals, including Bath, Brighton and Cheltenham, and he has been artist in residence at several others. He has performed many times in the Wigmore Hall and the South Bank in London and has broadcast regularly for BBC Radio 3. For many years he has been invited to perform and teach at the Dartington International Summer School. His recording of Dvořák Piano Works was selected in the Gramophone Critics’ Choice, and his recording of Fibich’s ‘Moods, Impressions and Souvenirs’ won a Diapason D’Or award in France.

Recent solo engagements have included a performance at the 2015 Bermuda Festival, the premiere of David Matthews’s Four Portraits at the Spitalfields Festival in London and performances at the Cheltenham, Deal, Leamington, Petworth and Paxton Festivals, at Kings Place in London, in Brno (Czech Republic), Italy and Oregon, USA. In 2011 he made a recording of Pavel Zemek Novák’s extraordinary 75-minute cycle of 24 Preludes and Fugues. A double five-star review in the BBC Music Magazine described the performance as “superb” and the music “a real discovery”. His most recent album, Sixteen Love Songs, released in June 2016 on Orchid Classics was selected as ‘Drive Discovery of the Week’ on Classic FM.

He is passionate about 19th century piano repertoire, especially Schubert, Chopin, Schumann and Fauré. He also has a strong interest in Czech piano music, and has been particularly acclaimed for his performance of Janáček, for which he received a medal from the Czech Minister of Culture in 1986. Many leading composers of the present day have written for him, including, Sally Beamish, Petr Eben, Piers Hellawell, David Matthews, Pavel Novák, Anthony Powers, Howard Skempton and Judith Weir. In 2016 he launched a project to commission sixteen love songs for solo piano from leading composers in the UK and abroad, including Elena Kats-Chernin, Nico Muhly, Richard Reed Parry and Judith Weir. He also set up an international composing competition for writing piano love songs that attracted over 500 entries from 61 countries.

“Certain pieces do draw from classical harmony, but I wouldn’t describe any of my music as classical. Some people might say post-minimalist or post-classical. I quite like the latter term, but it’s strongly associated with the hyper-trendy felt-piano/una-corda aesthetic, which is a path I’ve avoided.”
Winspit Quarry #Purbeck #Dorset #swcoastalpath
Today’s walk from Worth Matravers to Winspit Quarry #Dorset #walks #swcoastalpath #Purbeck #coast
Great to be back @englishnationalopera for mesmerising and moving #enosatyagraha. A really beautiful production #opera #Ghandi #PhilipGlass #London
Apple & black pudding Tarte Tatin made by @__max__wilson__ #delicious #homemade #restaurantfood
“We are fortunate to be very good friends and knowing each other so well allows us to trust one another musically on stage giving us confidence to take risks in performances.”