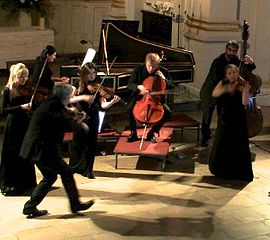 Music-in-Motion is a revolution in classical music performance, conceived and developed by conductor John Landor. The musicians perform without music stands or chairs, using movements and gestures designed to clarify the structure, drama and emotional impact of the music.

I met with John Landor to talk about early musical influences, significant teachers, the impetus for creating Music-in-Motion, and more…..

Although none of my family were professional musicians, my father was a keen jazz trumpeter in his youth, and my mother loved the arts and played piano. We had a rather large family of six children and we did a lot of singing as a family. I was born in the Midwest USA and I remember vividly evenings “on the porch” singing all the old American favourites like ‘She’ll Be Comin’ Round the Mountain’, all that homespun stuff.

All my siblings learnt musical instruments, so I just assumed it was something everyone did. I remember proudly carrying home my first violin, the sense of ownership of something special. But almost as soon as I started lessons the family moved around a lot, which meant that it was difficult to get any regular teaching. At age ten I ended up as a chorister at Westminster Cathedral Choir School. There was no violin teacher, so I spent every morning break teaching myself, and also started to compose little pieces.

At WCCS I absorbed the whole Italian Catholic choral tradition. With 10 services to sing each week we all essentially became professional musicians at an early age. Although I hated being away from home (we were all boarders) the music was my great solace.

Was violin your first study instrument at Royal Academy of Music?

No, I decided there wasn’t much point in pursuing it as I was never going to play at the level I wanted to. My first experience of conducting around age 15 (one of my own compositions at school) was an epiphany. I walked around for days in a state of bliss and knew from that moment that this was what I wanted to do. I went to Oxford University to get a music degree and spent all my time forming orchestras and conducting concerts and went on to the Academy for conducting and composition.

My huge inspiration was Ilya Musin. At 34, I took some time for an artistic ‘re-fresh’ and went to study for a few months with him at the St Petersburg Conservatory. It was a revelation. Musin didn’t speak English but he spoke what I felt was my musical language, far more than anything I had encountered in all my years of study. I really felt I had ‘come home’, and fell in love with Russia in the process – such a fascinating country and people, complex, difficult, but so beguiling. He was the first teacher who talked about ‘character’ in music and that was a light-bulb moment. In my classes at RAM everyone talked about the nuts and bolts of conducting, but no one said anything about character. If the character of the music is absorbed, everything else starts to happen on its own. It was a total Eureka moment. I spent three months in classes with astonishment, amazement and relief, and it had a deep impact on my conducting.

This experience helped in the creation of Music-in-Motion?

Yes, although not directly. My finding the concept of Music in Motion was a slow evolution. It all started with the Mini Maestro family concerts I gave at St Martin-in-the-Fields around 2000 with LMA Orchestra. Because the sightlines there are not ideal for small children I started to send the orchestra out into the audience to play, with the kids holding their music. It gave them a chance to hear and see professional musicians close-up. But an important by-product was that it showed me that musicians can play perfectly well together even if spread out over a relatively large area.

I also realized that audiences just love being close to, or even in the middle of, the musical action – they’d say “wow! An oboist is playing in my face while I’m holding the music!”. And that face-to-face interaction with their audience gave the musicians a real buzz too – they felt more that they were artists in their own right communicating as individuals as well as a collective.

Then it occurred to me that if the musicians were able to move around while playing, they could perform more like actors on a stage and I could ‘choreograph’ the movements to show the interactions in the music. We started doing demonstrations of this in my Meet-the-Music discovery sessions in the interval of some of our evening concerts. The audience reaction was so extraordinary, it was clear that we had found something that was unusually powerful and inspiring. Instead of a static group of musicians seated in front of music stands, here was a living, moving, breathing musical organism.

Since then I have realized that this way of playing has almost limitless uses. For a start it’s ‘educational’ almost by default as it makes clear visually what is happening in the music without need for verbal explanation. All those people who like (or want to like) classical music but are put off by traditional concerts might find this a great way in. And for any musician it’s a great training for general expressivity as it challenges them to think more about how they communicate.

What influences would you say led you to the idea of Music-in-Motion?

First, Lindsay Kemp’s work, which made me understand how important context is to a performance. Secondly, a performance by the Mark Morris Dance Company where I ‘saw’ as well as heard a fugue being performed – a musical ‘line’ of dancers animated each voice of the fugue in a way that was incredibly clear and expressive. And finally, and most directly, Jonathan Miller’s production of the St Matthew Passion. In the arias with obbligato instruments, both singer and instrumentalist stood face to face, and I found it so direct, human and intimate compared to how it is normally done – just amazing. That deeply impressed me.

Is there a historical precedent for this?

Not that I can find or think of! For an idea that seems so obvious to me now, I find it almost unbelievable that there seems to be no historical precedent. Of course there has been quite a lot of work in the past few decades where musicians move on stage with dancers or act while playing. But these I find essentially use music to enhance a theatrical experience – whereas I am using theatre to enhance a musical experience.

I want to emphasise that Music-in-Motion is about revealing and highlighting the choreography, drama and acting that is intrinsic to the physical act of playing music already – not adding show or gimmicks! I am acutely aware that the moment you add a dancer, actor, video projections or have artists painting during a musical performance, the music itself becomes background. It’s incredibly vulnerable to that. So, while I whole-heartedly endorse the concept of musical performance in these kind of theatrical or dramatic contexts, that is the complete opposite of what I am trying to achieve. In a nutshell: a theatre of music, not music of theatre!

Do you feel any music could undergo the Music-in-Motion treatment?

Undergo? I think ‘thrive with’ is more the phrase I would use!

I’ve been purposefully focusing on core repertoire that isn’t overtly ballet or dance-inspired. In the Bach double violin concerto where the ripieno music interjects we had the players stepping out and back like a backing group to the soloists. It made the structure of the music so crystal clear to the audience.

In Mozart’s Jupiter, there’s this little Alberti figure in the second violins accompanying the tune. Normally it barely features in the aural landscape, it simply fills in the harmony. But then we musicians know it is in fact a completely wonderful, busy little conspiratorial moment in its own right. So we got all the second violins to play it in a huddle. All the sudden it became a vital part of the performance, not just an accompanying figure.

I want every and any audience to be fascinated by the riches contained in every single bar of a Brahms Symphony or a late Beethoven quartet – and not needing to be a connoisseur to appreciate it to the fullest extent possible, even on a first hearing.

How do you find musicians respond to Music-in-Motion?

Funnily enough the only run-ins I’ve had were with double basses! They felt it was a gimmick. Mostly, musicians start out pleasantly bemused, but once they get a taste of the sense of liberation from the normal hierarchies of traditional performance they love it! It makes each member of the ensemble feel they really count as individuals. Of course a certain level of stagecraft needs to be learned if it is not all to look a mess and distract from the music.

Does it affect the sound?

Yes it does, in several ways. The sound is much better. Music stands block sound, so when they are all removed there is better overall projection of the music. Even when a player turns while playing, the acoustic changes, so there’s yet another aspect of Music-in-Motion that can be used to enhance the experience of listening. Though it must only be used to clarify the music.

What do you consider to be the most important ideas or concepts to impart to aspiring musicians?

Be yourself and know what you are communicating.

Because the space we need to play our instruments is relatively small and, after all, most instruments are attached to our bodies in some way, many musicians naturally tend to focus inwards. The next point of focus is “am I playing well?”, then “what would my teacher think?”, then “I hope I am living up to the composer’s expectation” then “will I get a good review?’ – and only then the ‘end-user’, the audience, is considered! Music-in-Motion starts with the audience. How can we inspire, delight and fascinate them with what we do? If we can do this, I have no fears about the future of classical music.

Music-in-Motion – Shostakovich String Quartet No.8 performed by the Konvalia Quartet

John Landor is Music Director of London Musical Arts Orchestra, based at St Martin-in-the-Fields. He has been developing a new concept in orchestral and ensemble performance called Music-in-Motion since 2013.

Musicians and ensembles interested in exploring the concept are warmly invited to apply for one of his Music-in-Motion Workshops held regularly in London. Further information here